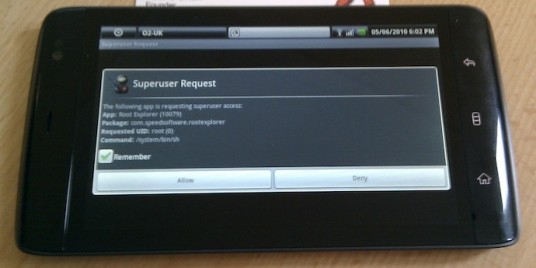 These days, we can’t seem to go a a week without hearing about Android smartphones like the Sprint HTC EVO 4G or the Incredible getting root. Following on the HTC EVO 4G’s root-killing OTA update from Sprint and the Android 2.2 OS “Froyo” ROM for the Motorola Droid, we’re now hearing reports that the Dell Streak has been rooted and is ready to give up SuperUser access. Well, “almost” ready. While root has been achieved, we aren’t yet given root instructions for the Dell Streak just yet.

The Dell Streak, for those of you not well versed in Dell’s Android lineup, sports a monstrous 5-inch WVGA capacitive touchscreen display, 1Ghz processor, 5-megapixel camera with autofocus and dual LED flash, forward-facing VGA conferencing camera, WiFi, GPS, 3G, and 512 MB of RAM. In fact, Dell’s Android-powered slate device is so big that it’s blurring the lines between a smartphone and a tablet device. You can call it a “smart tablet,” we’ll just call it “awesome.”

So, what’s the deal with getting root on the almost-tablet? As it stands today, there are no rooting instructions available. Seeing as how the handset has yet to hit US shores, we’re not surprised that there’s no tutorial for gaining root access on the Streak. What we do have, though, is confirmation from MoDaCo that the device has had its Android 1.6 OS rooted for SuperUser permissions.

With a little luck, we’ll have full rooting instructions for the Dell Streak by the time it launches in The States. Fingers crossed!