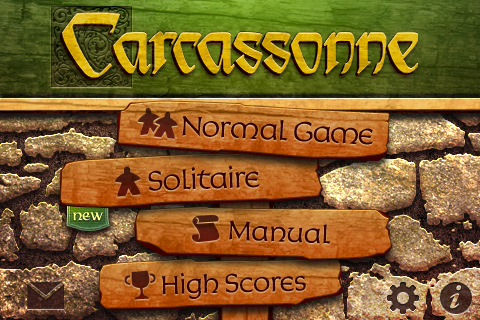 When I was just a wee lad growing up in the 80s, board games were a huge part of my gaming life. The Atari 2600 & Nintendo Entertainment System were great and all, but you just couldn’t keep a good board game down. Monopoly, Trouble, even a fine game of Chess or Checkers took much of my leisure time at home, but there was one board game in particular that I had a fondness for and that was Carcassonne. It looks like I can relive the days of playing Carcassonne all over again as the game has just been released for the iPhone.

Carcassonne for the iPhone successfully recreates the board game experience in both how the game plays as well as its look. You can play friends online via local Bluetooth, Wi-Fi, and online multiplayer through the Internet. Don’t have friends? No problem as Carcassonne can match you up with other players around the world to play against, as well as having a choice to play one of eight different AI players. Push notifications ensures that you don’t miss your next turn while you’re out and about. There’s also an in-game chat function which allows you to trash talk your way through a “friendly” game.

Developer TheCodingMonkeys promises an iPad version in the near future which will be free for those who buy Carcassonne for the iPhone at its introductory price of $4.99. Once the iPad version is released, the universal app will be raised to $9.99.

iPhone 4G/HD Launch and WWDC to be Covered Live on IntoMobile Today!

Alright, we've been tantalized by the next iPhone for long enough. Today kicks off the Worldwide Developer Conference, Apple's show...