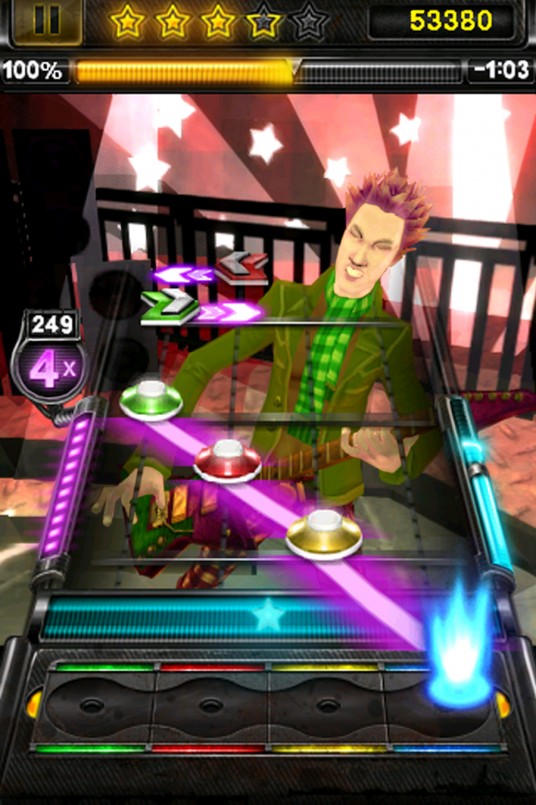 If you were keeping track of today’s live blog from WWDC, then you might have caught a glimpse of a new game from Activision taking center stage during the keynote. Guitar Hero has finally come to the iPhone!

Guitar Hero was built exclusively for the iPhone and takes full advantage of the iPhone platform’s functionality. The game will allow players to tap, slide and whammy their way through a number of popular musical tracks from artists like Queen, Rise Against, The Rolling Stones, Vampire Weekend, Weezer and The White Stripes. Each version of Guitar Hero will be unique as the game allows you to customize your avatar in its avatar customization mode as well as allowing you to share your scores through Facebook, check leaderboards and receive updates through Guitar Hero’s in-game news feed.

One thing missing from Guitar Hero that Rock Band offers is multiplayer mode, specifically the option for 4 people to play over Bluetooth.  Granted, I haven’t had the pleasure to take advantage of this feature in Rock Band as A) I don’t have any friends with an iPhone and B) Even if I did, that wouldn’t mean they’d have a copy of Rock Band on there.  Regardless, this is still an option that would have been great to integrate in Guitar Hero.

Guitar Hero is available for $2.99 and initially offers 6 tracks to play, with six additional song packs selling for $1.99 each available at launch. To get the full list of tracks, hit the break.

The Guitar Hero base app will feature the following tracks:

· The Rolling Stones – “Paint It Black”

Song Pack featuring The Faint, Minus the Bear and Silversun Pickups:

· Minus the Bear – “Secret Country”

· Band of Skulls – “Death By Diamonds And Pearls”

· Protest the Hero – “Limb From Limb”

· “Another One Bites The Dust”

This year's iPhone 4 update was different from previous years because of the avalanche of leaks that hit the Interwebs....