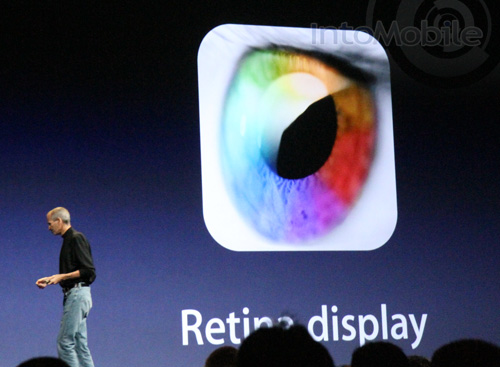 Normally when Apple uses words like “magical” and “revolutionary”, I roll my eyes. So much of what they do has come before – they’re simply iterating in an especially stylish way. That’s good, don’t get me wrong. They’re moving technology beyond function and into fashion, thus popularizing what us niche geeks have been enjoying for some time. However, the one thing that stuck out as actually new and potentially revolutionary from today’s iPhone 4 announcement was the Retina display, which boasted a heretofore unseen 326 pixels per inch. Without having one in hand, we can only imagine the degree of sharpness and clarity such a display offers. 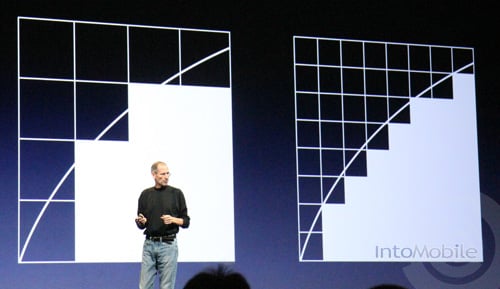 The iPhone 4 has a 3.5″ display and clocks in at a mightily impressive 960 x 640 display. Most of the higher-resolution displays available in smartphones today pull it off by having a correspondingly large physical area, only adding to the impressiveness of Apple’s ability to keep the iPhone 4 slim and sharp. The Toshiba TG01 is actually an excellent example, since it is the next skinniest smartphone after the iPhone 4 (9.7 mm vs. 9.3 mm). It only achieves a resolution of 800 x 480 by making its display 4.1″  – far from pocketable. The more recent HTC EVO 4G is in a similar position, and lets itself go at a 13 mm thickness. In terms of density, the only phone to have come remotely close to the iPhone 4 is the Sony Ericsson Xperia X1 at 311 pixels per inch; 800 x 380 in a 3″ display. The only place you’ll see pixel density like Apple’s these days are in high-end computer monitors, and even then, they suffer when it comes to contrast ratio.

Speaking of which, let’ s give a nod to the 800:1 contrast ratio. The technology for a 2,000:1 contrast ratio in a mobile device has been available for awhile, and even modern pico projectors and flexible displays can pull off 1,000:1. As for proper displays in existing handsets, Japanese superphones from three years ago could do 2,000:1. So, it’s clearly not something Apple has a big lead in, but when combined with their impressive pixel density, 800:1 should do just fine.

Until today, the iPhone’s display had been outclassed in relatively short order. The first generation display launched three years ago at a 320 x 480 resolution, stuck through 3G and 3GS devices. Now, that position is entirely reversed, and it’s the other manufacturers who have to play catch-up to Apple, but it won’t last – two years ago, Casio announced a 2″ display that rocked 546 pixels per inch, and you better believe the other manufacturers were sniffing around it then, and likely getting the wheels turning for a handset to use it. At the 500-600 PPI point, we’re approaching what the human eye can actually recognize, beyond which there’s little differentiation. When that happens, display technology will have to get awfully creative to catch our eye – 3D, anyone?

Until then, we’ll have the June 24 launch of the iPhone 4, when we can put the screen side-by-side to just about any other cell phone, and laugh.