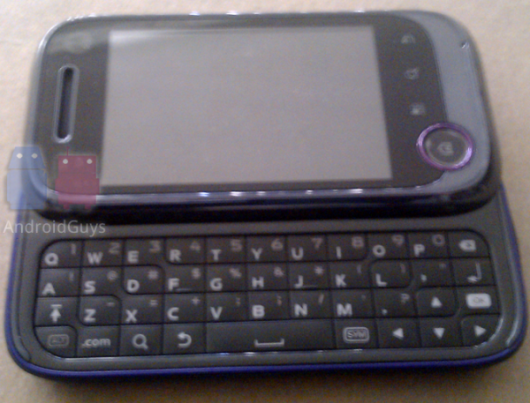 With other smaller, regional carrier such as US Cellular, and Cellular South, Metro PCS is now jumping on the Android bandwagon. The mystery Motorola slider has the makings of a pretty decent mid-range device, and it would be considered high-range since we’re talking Metro PCS here.

While it may not be the HTC Desire, it’s a nice option to add to Metro’s lineup. From what we know of the device, it’ll sport Motoblur, which will be running atop of Android 2.1. It’s pretty sad that Metro is getting a better device than AT&T’s first Android device, I might add. Other than the updated software version, it looks to be a standard Motorola affair. The screen size is likely 3.1 inches, which is used on both the Motorola CLIQ and CLIQ XT, as well as the Devour. ROM and RAM are unknown, but we should be seeing a 600Mhz processor aboard this device as well. I think it’d be safe to bet we may see a 3-5 megapixel camera on the phone, too.

With a decent specs-sheet, and Metro PCS’ pricing, this mystery slider should have no problem finding new homes to the carrier’s customers. It may not have many software enhancements, or upcoming ad campaign, but I’d peg this new Moto device with the likes of the MyTouch Slide. No, that’s not an insult. Both look to be powerful enough to get some heavy-duty emailing on, just don’t think you’re going to get something like Droid Incredible speeds (1GHz processor) on the thing. Luckily, since the device is shipping with Android 2.1, there’s a good change this bad boy will see some Froyo later on down the road.

This stands to give Android another avenue that other competitors aren’t reaching into. Seeping into any carrier it can, just as Google wants. The real question is, would you even consider leaving a major carrier for this thing? Doubtful, but this is just another way to get Android in the hands of customers who don’t want to be spending an arm or a leg for everything.

Superphone shootout: what’s the best smartphone for this summer?

Apple's iPhone 4 looks like it will be a killer device but there are a plethora of good smartphones on...