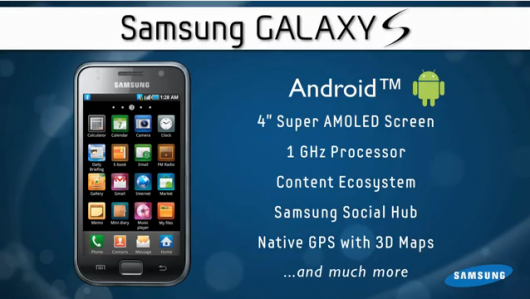 Even with the new iPhone 4 stealing the spotlight, Samsung has no intentions to slow the hype of the Samsung Galaxy S. Today a teaser site was just launched, and we’re also hearing a possible release date for the device on T-Mobile USA.

Samsung launched a teaser site for the Galaxy S today, which showcases some of the great features of the phone. Within the site, you can sign up for updates about the devices, as well as watch the official demo from when it was announced at CTIA this past January. Like we said, this is a teaser site, so there is really not much else that’s going on in it, but it’s enough to get us pretty damn excited. With that Super AMOLED screen, I’d love to see how the new iPhone’s retina display compares to the Galaxy S.

In other news concerning Samsung’s first great Android device, we’re also hearing that the Galaxy S could be launching on July 21th on T-Mobile USA. While nothing has been made official, there have been rumors that T-Mobile would get first dibs on this device, and it’s looking more and more possible now. However, because nothing’s official, these are nothing but rumors at the moment, and we hope to hear some news coming from either Samsung or T-Mobile themselves in the near future.

If rumors are true, and T-Mobile is to get the Galaxy S sometime in late July, the exclusivity won’t last long, or possibly at all. Samsung is said to be releasing the device in 110 countries at once, after all.

T-Mobile needs something attractive in their line-up that no one else has that other people want, and the MyTouch Slide, as nice as it is, is not the device to switch carriers for. Hopefully we’ll be hearing more soon about the Galaxy S, on an official basis.

If you’re a smart smartphone buyer, you should make sure you get all the choices laid out for you first. Most people were waiting for the announcement of the iPhone 4, as the be all end all, but that’s just not the case with all the Android options you have at your fingertips. We’ll also see even more powerful smartphones released throughout the summer, and if Verizon launches anything that’s been hiding up their sleeve this summer, waiting may indeed be the best choice.

With other smaller, regional carrier such as US Cellular, and Cellular South, Metro PCS is now jumping on the Android...