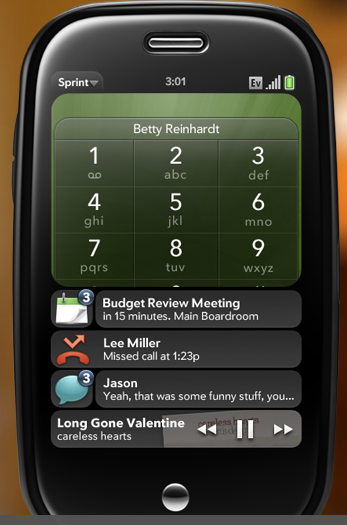 Rich Dellinger, who according to his LinkedIn profile was the “User Interface Design Architect” at Palm between July 2006 and May 2010 (3 years 11 months) and whose roles included:

Is now working for Apple as a Senior User Interface Designer. This isn’t the first time Rich has worked at Apple. Between 2003 and 2005 (2 years) he was a “Web Designer”. Between March 2003 and August 2005 (2 years 6 months) he was the Lead Web Designer for Online Support where his role was:

Responsible for complete visual renovation of Apple’s support site, comprising over 50 unique product identities and over 20,000 technical documents. Provided all graphical elements and a majority of the layout and html for use on the support website. Apple’s support site received its first award, winning the ASP’s Top 10 Support Sites of 2004 award.

And between August 2005 to April 2006 (9 months) he was a User Interface Designer where his role at Apple was:

So after nearly 3.5 years at Apple, and then nearly 4 years at Palm, he decided to come to Cupertino. Good choice I’d say since I have no faith in HP, at all, to do anything meaningful with the Palm brand, the Palm webOS, and Palm’s intellectual property.

Update: According to Rich’s personal site, he’s actually been at Apple a lot longer than 3.5 years. How does over a decade sound?

If you're a fan of the comical stylings of Glee's Jane Lynch, you'll love this new iPhone 4 ad spoof...