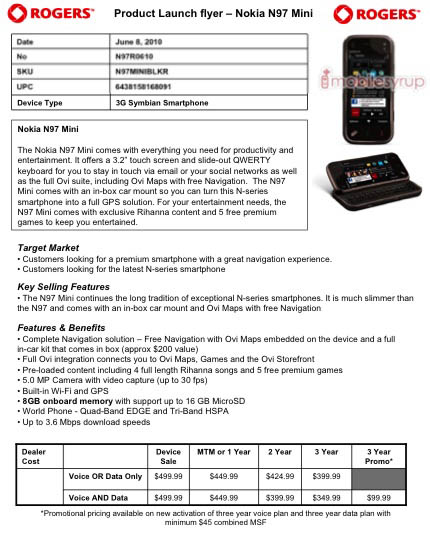 We knew the Nokia N97 Mini was coming to Rogers, the only question was WHEN. Sometime in May was the first I had heard, however June or July seemed like a more reasonable guess… But if you guessed early June, it looks like you were spot-on. Rogers has sent out a product launch flyer (pictured above), which means the Nokia N97 Mini will be ready for Canadian mobile junkies very soon. The pricing should go as follows:

Note the classic Rogers ‘gauging’ when it comes to 1-year, 2-year and off-contract pricing. They really want you to sign up for that 3-year deal don’t they? I wonder where they’re making the most money… hmmmmmm…. 🙂

Key specs on the Rogers Nokia N97 mini include:

If these specs don’t tickle your fancy, the device will also come with 4 full length Rihanna songs and 5 free premium games. Oh, and you’ll also find an in-box car mount and Ovi Maps to help you get around town. Very cool.

Stay tuned for more. We’ll keep an eye out for the official launch notice.

One of the most frustrating thing about Nokia's portfolio of devices is the lack of consistency on lots of little...