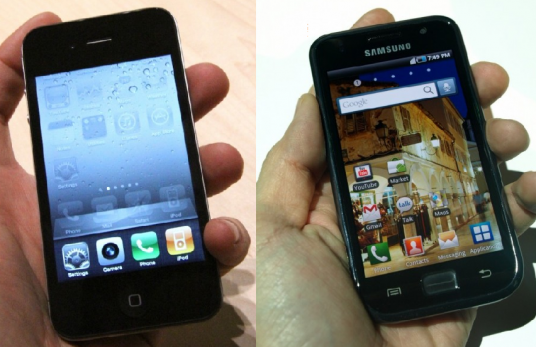 battle of the displays

Let’s be honest here, the iPhone 4’s Retina Display is absolutely stunning, with a resolution (326 ppi / dpi) that absolutely demolishes all competition in the market today. The new Retina Display, surpasses the resolution at which the human eye can resolve individual pixels, which is simply astounding (although debatable in its implementation, more below). But that’s still not keeping a select few from speaking out about it, saying that it’s nothing more than “spec exaggeration.” Samsung had their say about it today, and they believe that AMOLED is still the clear winner in the screen arena.

A Samsung representative spoke to the Korean Herald, saying that quadrupling the resolution on the screen would only increase the clarity at most only three to five percent. They also said that this type of display is too power-hungry, draining it almost 30 percent faster than Samsung’s Super AMOLED technology. Luckily, the new iPhone’s battery should be able to take it.

An AMOLED display does not need a backlight, which makes it much more energy-efficient. The use of OLED pixels also allows the Super AMOLED display to show colors more accurately, while also giving a higher contrast. Blacks are more black, colors are more vibrant, and has no limit on viewing angles. Just don’t take one out in direct sunlight.

The main draw back from traditional AMOLED screens is that they suffer greatly in the sun, but that’s not the case with Samsung’s Super AMOLED screens, which will be available on the company’s Wave, and upcoming Galaxy S smartphones. Building upon the benefits of existing AMOLED screens, Samsung’s Super AMOLED displays are much less reflective in the sun, brighter, thinner and even more energy-efficient. But it will take sitting the two types of displays right next to each other to truly get an opinion. We wouldn’t want to go soley on Samsung’s word alone – they’ve obviously been drinking some haterade.

Apple had said that the limit of the human retina is around 300 pixels per inch (ppi / dpi), and the new iPhone 4 Retina Display surpasses this this limit. Raymond Soneira,Founder, President and CEO of DisplayMate Technologies said that to truly achieve a display that would be invisible to the human eye, the PPI would have to be somewhere near 477PPI, and what Apple claims isn’t even true unless you’re holding the device about 1.5 feet away from your eyes. So yes, Apple has exaggerated about the clarity of their display, but it doesn’t mean that it makes the display a bad display. Plus, this isn’t the first time Apple has announced a slight fib about their achievements.

All in all, we’re gonna have to get the iPhone 4’s Retina Display and the Samsung Galaxy S’ Super AMOLED screen a proper showdown when we can actually get our hands on them. With this kind of war brewing, the consumer wins, and options are always great.