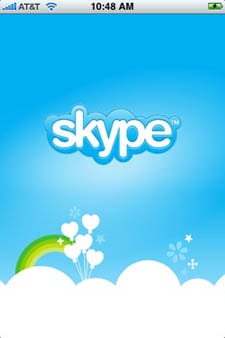 Steve Jobs acted like the future was here with FaceTime for iPhone 4, even though I first saw video chatting for mobile phones back in 2004, and now Skype wants in on the action. According to PocketLint, with whom Skype confirmed this information, the popular service is looking to work with Apple to add video chatting to iPhone 4. It was only inevitable, right?

Right now, FaceTime for the iPhone only works over Wi-Fi, which is a major drag for those of us who want to be able to make video calls on the go where Wi-Fi isn’t available. Another thing to consider is the fact that Wi-Fi isn’t always free everywhere we go, and it makes no sense to have to pay for Wi-Fi access if we just want to make video calls.

Apple insists that video calls over Wi-Fi will provide better quality, and while we’re not too happy about that, it likely will. Video chatting works much better over Wi-Fi than it does via 3G as we’ve seen in the past with Skype on the N900 or Fring for the HTC EVO 4G. Still, if we haven’t seen a friend or loved one in a long time, does it really matter if the quality isn’t perfect? What’s more important to you – being able to make the video call and getting a glimpse of your baby boy or wife, or doing so only under the most optimal and perfect conditions only?

Skype could get video calls working on the iPhone 4 just like the way it does for the Nokia N900 – over 3G and Wi-Fi. After all, there is nothing like introducing a new feature like FaceTime that many have been waiting for only to find such limitations. So we’re hoping Apple lets Skype in on this one. Of course, one major concern after AT&T’s recent data plan changes is usage. Just how much data could video calling suck up when done over 3G?