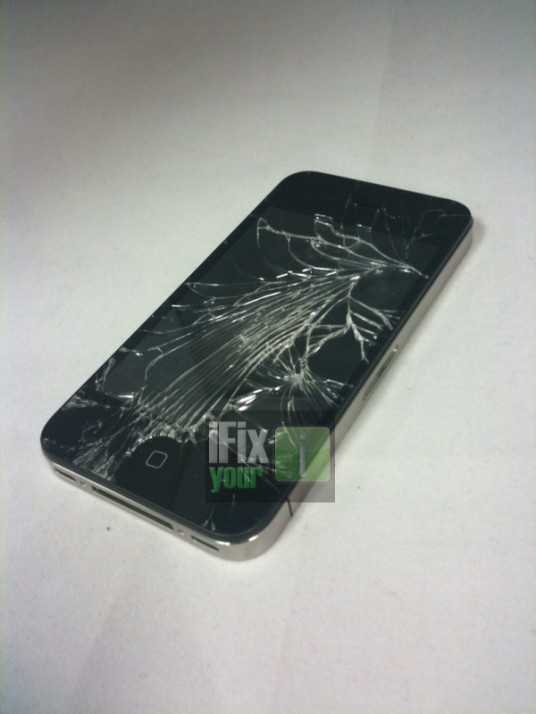 A cell phone repair shop got some parts for Apple’s iPhone 4 early, and decided to see how tough it was. Taking into account that there’s no circuit board inside, the casing handled 2 drops from 3.5 feet onto concrete, shattering on the third. In a separate test, the iPhone 4 handled 6-7 drops before breaking, and in yet another it broke on the first drop when it was face-down.

There is apparently a video floating around of the new glass plating on the front and back of the iPhone 4 bending, but flexibility doesn’t necessarily translate to shock absorption, and the glass on both sides is actually raised above the bezel rather than being flush with it on previous iPhones, making it even more vulnerable than older devices.

All the breakthrough technology in iPhone 4 is situated between two glossy panels of aluminosilicate glass — the same type of glass used in the windshields of helicopters and high-speed trains. Chemically strengthened to be 20 times stiffer and 30 times harder than plastic, the glass is ultradurable and more scratch resistant than ever. It’s also recyclable.

Sounds to me like being stiffer and harder would only make the screen even more prone to shattering, but the tester reported that it managed the scratch test extremely well – keys, razors, and screwdrivers didn’t leave a mark. Not like Apple would sell you a protective screen if you wanted one anyway; you’re better off getting one of those new bumpers.

In any case, obviously the iPhone 4 will break, but will it blend?

[via iFix Your i]

Sure, you don't have your iPhone 4 just yet... But you're in the market for accessories anyway, right? I mean,...