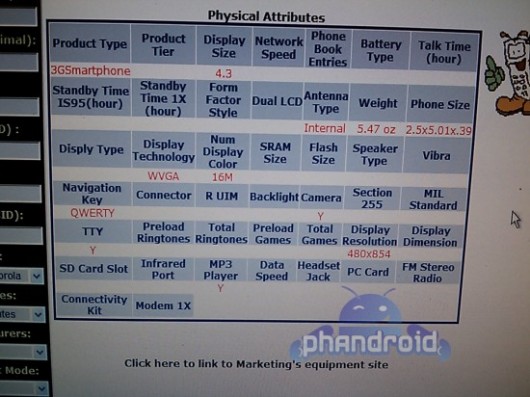 It looks like we have a couple of spec leaks on the much speculated Motorola Xtreme/Shadow/whatever, thanks to the guys over at Phandroid. What’s hiding inside this bad boy? Well, first of all, there’s the new model name – the Xtreme/Shadow will henceforth be known as the Motorola Droid X.

As far as the physical look of the device, we’ve seen it, a few times. But hard specs such as screen size and resolution have been unknown. From the pictures we’re seeing, we now know (if true) that the Droid X will sport a 4.3-inch display, with a resolution of  854 x 480. Anyone else disappointed, too? Neither of these specs are necessarily a bad thing, but with displays like the iPhone 4 Retina Display coming down the pipe this month, many were hoping Moto would step it up with their next high-end Android smartphone. The Droid X stands 5.01 tall, 2.5 wide, and 0.39 inches thick. That certainly doesn’t best the new iPhone’s thinness, but could indicate that the Droid X has something hiding under that massive display.

One thing that strikes us as odd is under the Navigation Key section in the physical attributes picture, it says QWERTY. I couldn’t imagine they would choose the word QWERTY in reference to a touch screen keyboard, so does the Droid X have a slide-out keyboard? Let’s hope so. It may not be 9.3 mm thin, but I’ll take 9.9 mm any day, if it sports a full slide-out keyboard. But, keep in mind that the specs listed here may be wrong. For example, browser type in the software information is listed as Safari. That’s highly unlikely, but the “Safari” mention could also refer to a “webkit browser” – just as “QWERTY” could also mean “touchscreen.” Its likely that the Droid X in fact does not have a real keyboard, but it’s always nice to imagine. CPU and RAM are still not known, but let’s hope for a Snapdragon at least!

If the Droid X ends up not sporting a slide-out keyboard, we can be assured that there’s something floating around in Verizon’s inventory that does indeed have one. We did get two WiFi certificates for two different Droid-like devices. It certainly couldn’t hurt Verizon to have two high-powered Android devices release at the same time, could it?

Verizon’s Motorola Droid 2 spotted showing off its QWERTY keyboard in the wild!

If you've been keeping up with the Android space in any sort of way, you'll probably have heard that Motorola...