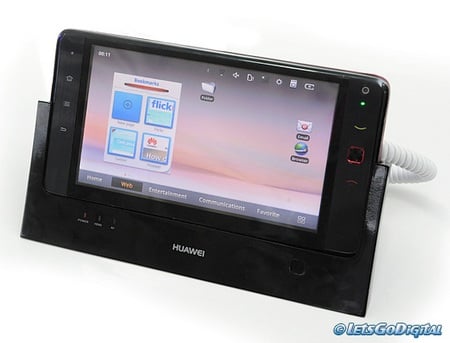 We’ve spotted Huawei’s S7 Android tablet a few times now, and the company is holding a press event on June 24th to announce more details on the device. We see a lot of tablets come and go, but the S7 may actually materialize some time soon.

Smarthouse, an online tech shop in Australia has said that details will be announced at the press event held on June 24th. We may get pricing and availability at the event, but it may just be the official announcement of the tablet.

The S7 is technically a tablet, but can also be used as a phone. Although, you’d better get a Bluetooth headset for that. There’s said to be a 3G option, but it’s still unknown whether this will actually be tied to a carrier like Dell’s Streak. Other known specs we’ve previously reported are Android 2.1 OS, 1GHz Snapdragon processor, 7-inch (800 x 480) display, 2 USB ports, HDMI port, Micro SD card slot, 3.5 mm headphone jack, and a nifty kickstand.

I personally love the size of the device, 7 inches for a tablet is the perfect size for such a device I believe. The iPad is also a good size, but I could easily live without the extra two inches. Hopefully we’ll see this thing actually make it to the States, as there’s really still no good alternative to Apple’s tablet device. None worth noting, at least.

While we wait on tablets like the S7, Notion Ink’s Adam, or Samsung’s Galaxy Tab, we’ll just have to make do with what we have now. That’s not a bad thing, but this one-size-fits-all mentality is just untrue for many.

So, with all these upcoming Android tablets boasting telephony functions, and obviously, bigger screens, it begs the question if these devices could start cannibalizing on smartphones themselves. In today’s economy, it might be hard decision for someone looking to spend $500 dollars on the cheapest iPad (or a tablet with a camera, more ports, HDMI etc.), or consider buying the iPhone 4. Many hardcore apple fans will find a way to get both, because that’s what they do, (and no offense on that), but is it smart to drop so much cash on electronics that have very similar attributes? If you’re about to drop some serious cash on a tablet device that boast many features of a smartphone (and more), will there be less incentive to get a new phone as well? Or would you be fine holding on to your existing smartphone?

Sound off in the comments. Do you think that tablets could start making people feel that they may not need the newest smartphone on the market?

If you want to keep up on the latest with the World Cup 2010, Skyfire has your back. You can...