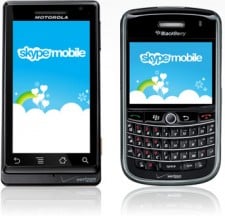 Skype users, it’s time to get more excited about Verizon once more as the two have announced that the VoIP service will be hitting more Big Red handsets soon. Back in February, Verizon and Skype struck up a deal just before Mobile World Congress and announced that they would be working together. The exciting part of it all is that Skype Mobile, which had been typically limited to Wi-Fi only on other carriers and handsets, would work over Verizon’s 3G network.

When the service became available, however, it was limited to just a number of handsets — BlackBerry and Android handsets, to be exact. This was a downer for those who didn’t have compatible handsets, especially since both the Skype application and the actual service is free as long as you have an unlimited data plan (and who doesn’t?).

Verizon says that the application will become more widely available toward the end of the year and will be on several 3G multimedia phones. This is good news for most because a number of the carrier’s handsets seem to fall under this giant umbrella of devices that qualify for the service. The application is also going to come in Spanish, Korean and simple Chinese in order to make global communication that much easier for speakers of those languages.

“Skype mobile from Verizon Wireless not only takes advantage of the reliability and breadth of our wireless network, but it’s also proving to be a great option for military families with loved ones stationed overseas, people with relatives in Asia or South America, and businesses with a global presence,” said Jennifer Byrne, executive director of business development at Verizon.

How many of you have been taking advantage of Skype on Verizon? For instant messaging and VoIP calling, I certainly have and the quality of it has been pretty damn good on my Motorola Droid, actually. If you’re pushing the limits of your minutes usage, it most definitely helps alleviate some of the worry.

It looks like we have a couple of spec leaks on the much speculated Motorola Xtreme/Shadow/whatever, thanks to the guys...