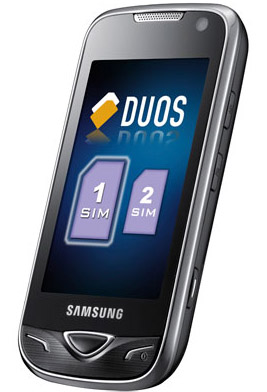 Newly unveiled Samsung B7722 is probably one of the most powerful dual-SIM capable devices we’ve seen to date. That said, we’re sad to say there are not that many powerful devices with such capability on the market…

Anyway, out of two SIM cards you can put inside the B7722, only the first one supports 3G (900/2100 MHz) data, while the second number will be restricted to GPRS/EDGE speeds. Rest of the features include a 3.2-inch touchscreen, 5-megapixel camera with LED flash, WiFi, Bluetooth 2.1, FM Radio, media player, 1200mAh battery, 200MB of internal memory that is further expandable with microSD memory cards. Samsung’s very own TouchWIZ UI is used for accessing the phone’s key functions and programs as well as for cyber schmoozing across social networking sites.

As for the pricing and availability, the B7722 will hit Sweden later this month, when interested folks will be able to grab it for 4,000 SEK which is about $510. Then afterwards, I would expect Samsung to release this baby to other markets across Europe and Asia… though we don’t have that confirmed at the moment.

Samsung Galaxy S available for pre-ordering at Vodafone UK; Could be yours on June 15th for FREE on a contract!

I love the UK's mobile phone market. They seem to be the single most competitive market in Europe. That said,...