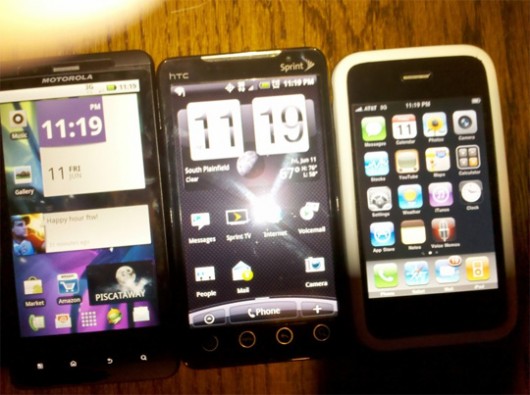 Are you tired of hearing about this Motorola Droid X yet? The Droid X has been flooding the tubes with pictures, showing off all sides. We knew this thing was going to be a large phone, but after seeing it next to the new Sprint HTC EVO 4G,  we can now say that the Droid X will be the largest Android phone to date when it launches on Verizon next month. If you’re not counting the Streak as a phone, that is.

While both share the same screen size as each other, the Droid X is larger than the EVO 4G. There isn’t too much of a difference, but it’s noticeable enough. We know that the two devices are on the larger side, but when you throw the iPhone right next to it, they are starting to look like giants.

I wouldn’t say that Motorola’s upcoming Android phone is too big to not consider it as your next smartphone, as it’s still looking quite slim and sexy. Same goes for the Motorola Droid X, measuring about 9.9 mm thick compared to the EVO’s 13mm thickness.

Unfortunately a big screen doesn’t give you all the bragging rights, the X has no front-facing camera for video-conferencing, and instead of hearing that it has a 1GHx Snapdragon processor, we’re hearing it may have the 750Mhz TI OMAP3630 processor instead. It also suffers the same as the EVO when it comes to software. Both sport customized user interfaces, which in turn delays time in between updates that Google pushes out. The EVO 4G and Droid X both have to get their custom UIs compatible with Froyo, and any other upcoming Android update before they can be pushed out to the devices. That much waiting may make you want to think twice on purchasing such devices, as nice as they might seemingly be over stock Android.

Be prepared to have a dedicated pocket for the Droid X if you decide to pick one up next month, it’s big, and something tells me it doesn’t like to share its space well.