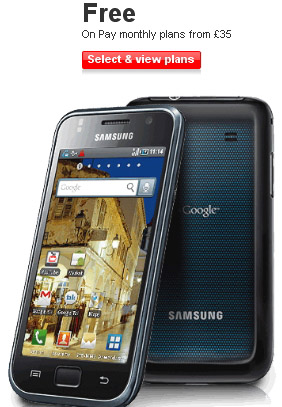 I love the UK’s mobile phone market. They seem to be the single most competitive market in Europe. That said, we have Vodafone offering one of the most desired Android smartphones on the planet, Samsung Galaxy S, for free on a contract! At the moment, everything is in the pre-ordering “phase” but the Galaxy S should ship on June 15th, which is only 4 days away!

That “free” price actually involves a monthly plan of at least 35 GBP (about $51), which is not that much considering the device you’ll be getting.

As a reminder, people want the Samsung Galaxy S because of its 4-inch Super AMOLED WVGA touchscreen that should provide the best colors and best visibility under the Sun. Rest of the specs include HSPA and WiFi connectivity, DLNA, Bluetooth 3.0, 1GHz CPU, 5-megapixel camera with auto-focus and HD video recording, and so on.

Finally, this won’t be the only “super desirable” device in Vodafone’s offering. The British carrier will also offer the iPhone 4 and Nokia N8…

U.S. Cellular has recently added a new low-end device to its portfolio. It's the Personal Communications Devices (PCD)-made CDM8635, which...