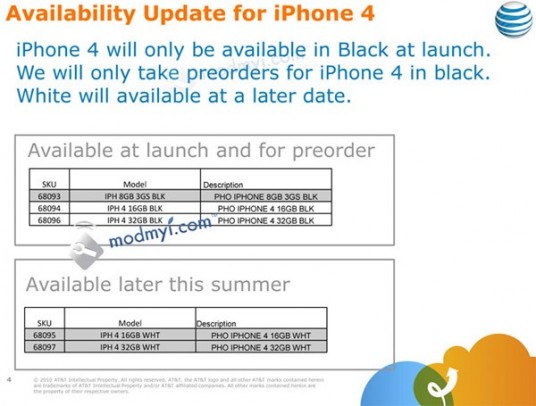 If you’ve been getting yourself psyched to pick up a new iPhone 4 in White on Apple’s iPhone launch day, you’re probably not going to like what we have to say. According to allegedly leaked AT&T documents, early adopters will have no say in what color their new iPhone 4 comes in. The docs indicate that only Black-colored models will be available at launch, with White variants coming to market sometime afterward, during Summer.

The document explains that:

iPhone 4 will only be available in Black at launch. We will only take preorders for iPhone 4 in Black. White will available at a later date.

If true, this would pretty much kill all hopes of anyone getting a White iPhone at an AT&T store, come June 24th. Word has it that AT&T will only have the Black iPhone 4 in 16GB and 32GB versions.

But, there’s still hope for all of you out there with your sights set on the fairer-colored iPhone 4. While it’s possible that AT&T won’t be offering an iPhone 4 that’s not Black, you might still be able to get your hands on the sought after color scheme from Apple proper or a third-party retailer.

So, we’re going to get our own pre-orders in tomorrow. Anyone else eying a White model?

Check out our iPhone 4 hands on impressions here and and video after the jump.

If you're excited about the upcoming Apple iPhone 4, you'll be happy to know that we've received AT&T's pre-order guide....