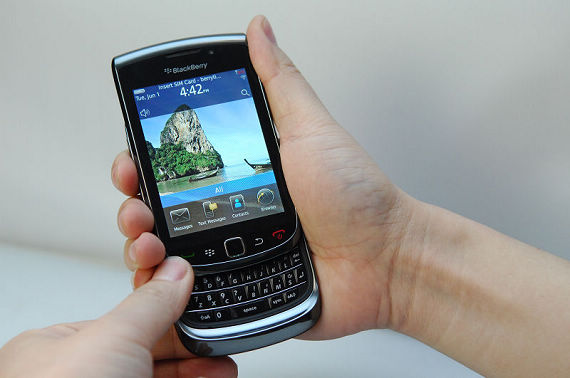 Although it’s been spotted clearly with Bold branding, the upcoming BlackBerry 9800 slider may get a whole new family of its own, called Torch. The decision hasn’t been firmly made according to rumours, but apparently it’s being seriously considered. The Torch name is likely not getting confused with a codename, since we already know the 9800 was being called Talladega internally for awhile.

Haven’t heard of it? The BlackBerry 9800 will be one of RIM’s first devices to run OS 6 (alongside the 9670 clamshell), and packs an HVGA touchscreen, Wi-Fi b/g/n, GPS, 3G, 4 GB of internal storage, and 512 MB of RAM. We’re still waiting on confirmation on the camera, but I’ve got my fingers crossed for 5 megapixels. Here’s a bunch of pictures of the hardware if you want to get a closer look.

So is a name change wise for the BlackBerry 9800? The Bold name represents the ideal enterprise device, an image from which RIM might not want to stray too far. On top of that, starting a whole new class would make a fifth group after Curve, Pearl, Bold, and Storm, potentially drowning buyers in names to remember. The BlackBerry 9650 ditched the Tour name in favour of the Bold, which shows that RIM is at least a little interested in consolidating their branding.

However, just take a second and look at the Curve family and see what happens when you go the other way and try to pigeonhole too many varied devices into the same group; you confuse buyers just as much, and do no favours for tech support who have to figure out which Curve their customer has. Besides, the 9800 is a very distinctive departure from the usual buttoned-down QWERTY candybar, and as a concept could merit its own name. I just hope they don’t do what they did with the Pearl Flip and tried leveraging an old family, but ended up diluting and confusing it, by, say, calling it the Bold Slide.

What do you guys think? BlackBerry Torch does have a nice ring to it.  One can only wonder what RIM would do with their next slider to fill up the family…