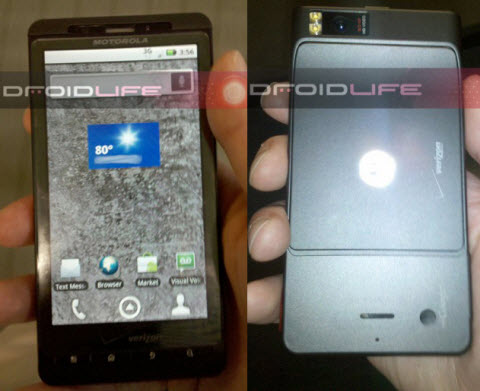 Motorola Droid fans have a lot to be excited about next month, although if you are a current owner you’re probably not ready for an upgrade just yet. For those of you who have been wanting the original Motorola handset, and maybe even tempted by the recent $50 price drop, you might want to hold off just a little longer. Rumor has it that Verizon is getting ready to launch the Motorola Droid X, the next in the Android series, by prepping its stores, swag and employees for a July 19 launch.

If you qualify for an upgrade, or you’re going to be a new customer and you haven’t succumbed to all the iPhone 4 hype and pre-orders, keep your eyes peeled for Verizon’s official announcement next week. At least, that’s the time frame we’re hearing from other sources online.

Still not sure whether you want to wait for this or just hit up the newly discounted Motorola Droid? You might want to consider specs and performance between the two devices. The original Droid has a 3.7 inch, 854 x 480 screen, but the new X has a monstrous 4.3 inch screen on a body that makes even the EVO 4G look tiny. There isn’t much of a huge gap between the processors for the two, whereas the original has a 600MHz CPU underclocked to 550Mhz, and the newer phone has a 750Mhz TI OMAP3630 (from what we’ve heard, anyway).

Lastly, one big consideration with the upcoming device versus the original is the fact that the former will have a custom UI. The original Droid is going to get Android 2.2, or Froyo, one of these days because it is currently running a straight version of Android 2.1. We know that custom UIs like HTC Sense or Motoblur cause those devices to take ages to get updates. If having the latest OS on time isn’t important to you, then by all means, get the latest and greatest device!