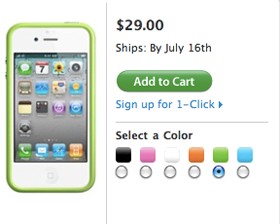 Apple isn’t just getting ridiculous traction with their iPhone 4 preorders, it looks like the official iPhone 4 “Bumper” cases are selling like hotcakes as well. With the iPhone 4 accessory landscape still looking a bit barren, it seems Apple is cashing in on their de-facto gotta-have case for your new iOS 4-powered smartphone. A quick check on Apple’s online storefront shows that ship dates for some Bumper cases are delayed by days to weeks, depending on the color. That would indicate that sales have been strong enough to dry-up current inventories.

The fact that ship dates on some cases are being pushed out to as far as July 16th (at the time of this writing) isn’t exactly proof positive that sales are outpacing supplies, but it sure does give us a good indicator of the kind of demand that iPhone 4 cases are generating right now. And, rightly so. The Apple iPhone 4 is most likely the most-hyped device of 2010. Sure, there were the Sprint HTC EVO 4G and the Verizon HTC Droid Incredible earlier this year, but now that those product launches have come and gone, all eyes are now on Apple to deliver their next-generation handset.

As TUAW points out, Apple also saw incredible demand for their official iPad Portfolio case upon launch. The demand was great enough to push ship dates further than the eye could see. It’s very likely that we’re seeing the same effect hitting the iPhone 4 Bumper cases.

So, have you ordered yours yet? We’re going naked with our own iPhone 4’s, but that’s just us. Let us know in the comments!