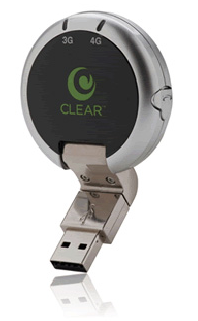 Slowly, but surely, Mac-friendly hardware is becoming more ubiquitous and Clear’s new 3G/4G modems and routers are proof of that. The 4G+ USB data stick is made by Sierra Wireless, as many of the data cards and sticks on the market are, and is the first of its kind to support Mac. When WiMax is weak or isn’t available, the Clear data card switches to the EVDO or 3G network. How much will this bad boy set you back? You can fork over $115 for the device or just pay a reasonable $6 per month for it if you want to lease it, much like you would a router from your local cable company. You’ll also need Mac OS X Leopard or higher.

As far as the routers go, you have two to choose from. The first is Spot 4G, and you really only want to go that route if you’re planning on sticking with Clear’s 4G range because it won’t work with anything else. The Spot 4G allows up to eight users so you can let your friends and family in on the WiMax goodness. Then there’s the Spot 4G+, which is essentially the same as Sprint’s 3G/4G Overdrive Hotspot and allows up to five users at once. This one will switch to 3G whenever Clear 4G is weak or not available at all.

For the routers, the Spot 4G for Clear is $100, or $5 per month lease and the Spot 4G+ is $225 or $6 per month lease. Then there are the rate plans for use. The Spot 4G is only $45 a month for home use or $65 if you’re going to be on the go since it’s limited to the WiMax network only. The 4G+ bumps everything up to $61 and $81, respectively, since you’re getting 3G data whenever the faster WiMax network isn’t available. Not too shabby when compared to what you’d normally get and pay for with your average carrier or even home broadband company.