Despite the iPhone 4 prototypes having already been torn-down and analyzed for all the world to see, Apple is still looking to keep specifics on its internal hardware a secret for at least another 45 days. Apple has formally requested that the FCC, which routinely posts hardware tests and information as part of its handset certification process, keep details on the iPhone 4 on lock down in the short term.

In a letter from Apple EMC and wireless compliance manager Robert Steinfeld, the iPhone 4 maker states that “Although Apple has begun to market the device publicly, these documents reveal technical and design information that has not yet been publicly disclosed in such marketing and that is protected by Apple as confidential and proprietary secrets.”

The 45-day short-term confidentiality request seeks to keep test setup, external and internal hardware, and user manual images out of the public eye. The Cupertino-based tech giant is also looking to keep things like schematics and bills of material for the cellular radio, Wi-Fi and Bluetooth functionality confidential for the long-term.

If you’re wondering how you’ll ever survive without getting the down-low on how much it costs Cupertino to manufacture an iPhone 4 and what kinds of hardware components are being used, fear not. We’re sure to see iPhone 4 tear-downs and bill of material (BOM) estimates hitting the web shortly following the official handset launch next week.

Make sure to stay tuned to IntoMobile for live coverage of the iPhone 4 launch next week!

This is the letter that was sent to the FCC: 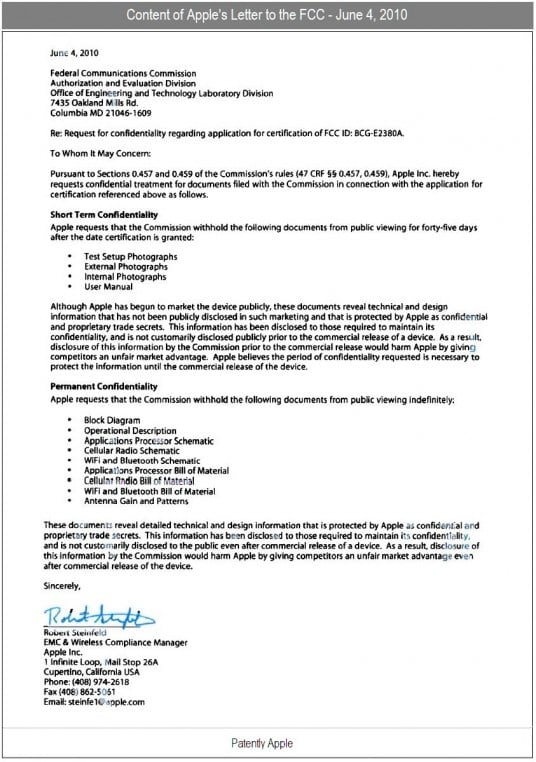 If you've been waiting on pins and needles for AT&T to actually launch an Android phone that doesn't make you...