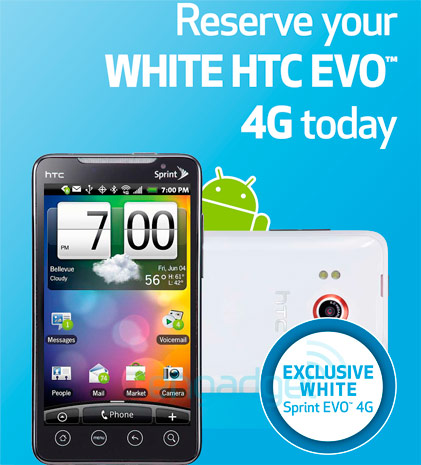 The HTC EVO 4G was so hot when it was launched that it was sold out within days with some pre-orders unfilled. It didn’t look like the want or attention for the device was going to go anywhere any time soon. But then the iPhone 4 was announced. So, what’s a handset manufacturer to do to keep things fresh and interesting? Introduce it in a new color, of course!

According to a source at Engadget, a white HTC EVO 4G is making its way to Best Buy exclusively. So if you want one the moment it hits, the rumor puts the release date at July 11 for the mega electronics retailer. Fret not if there isn’t a Best Buy near you, because the word is that the white EVO will eventually come to sprint on August 8, and everyone else is set to receive it by September.

Black isn’t such a bad color on a hot device like the EVO 4G, but it can certainly clash with a lot of style where white could be more appropriate depending on your tastes. But we’re not here to judge.

What, you're still using a Verizon HTC Touch Pro 2? In the mobile world, the Touch Pro 2 is a...