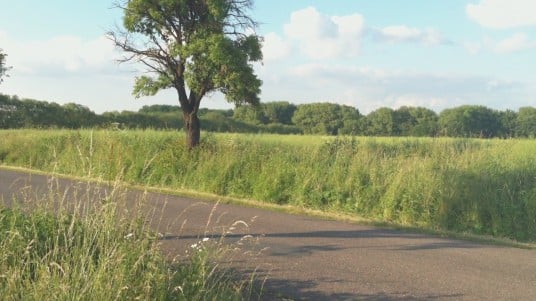 We’ve seen some still pictures taken from the iPhone 4’s 5-megapixel camera, and now we have a short clip showing the quality of the HD video recording. It’s not long, and doesn’t really put the video quality to the test (no low light or fast action), but damn is that sharp. The reviewer also mentioned that after an hour of heavy use, battery life only took a ten percent hit; not bad! GPS also locks on snappily, but the plastic frame around the glass is prone to slight damage. As expected, the iPhone 4 handles very quickly, especially with the 512 MB of RAM, and the slim dimensions make it highly pocketable.

The iPhone 4 is still a couple days away from its official launch – which we’ll be live-blogging and live-streaming from the Palo Alto Apple Store, by the way – but Czech site Jablí?ká?.cz have their hands on what seems to be a bona fide iPhone 4. We can’t verify the legitimacy of their claim, but the website did post a picture of what looks like an iPhone 4 laying atop a recent newspaper. The site also posted image and video samples from the purportedly unreleased Apple smartphone.

If the claim is legit, it’s clear that the iPhone 4 camera is indeed as impressive as Steve Jobs claimed. During the WWDC 2010 keynote, Jobs mentioned that the iPhone 4 camera’s image sensor employed some of the largest pixels of any 5-megapixel cameraphone. Those larger pixels were said to capture more light than other 5MP shooters available today. And, the samples we see here definitely fall in line with that assertion.

The iPhone 4 is the first of Apple’s mobile products to hit the 5 megapixel mark as well as have an LED flash. The addition of iMovie will make the iPhone 4 a serious media-capturing (and sharing) powerhouse. I’ve seen mobile phone cameras that have taken considerably worse shots than this, and had a higher megapixel count – one can only imagine what sort of secret sauce Apple is using to crank out this level of quality.

You can upload the original video here to take a look for yourself – trust me when I say the web videos do not do the raw file justice.

If the first batch wasn’t enough, there are more still samples after the jump!

In December, AT&T released an iPhone app called Mark the Spot, which would submit poor coverage areas to AT&T for...