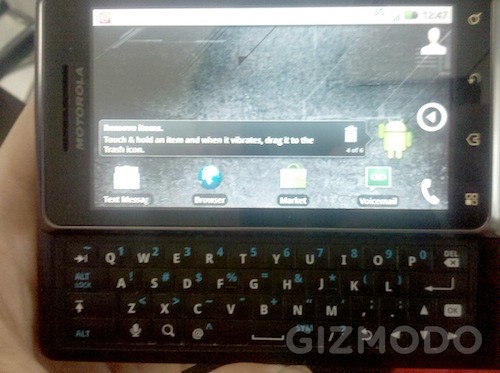 While it’s probably the most anticipated sequel to any Android phone out there, (if you’ve lost hope in ever seeing a Nexus 2, that is) the Motorola Droid 2 looks like it could possibly end up a disappointment compared to the Motorola Droid X. And, with more pictures of Motorola’s high-end Android sequel hitting the web, we’re not too sure if the Droid 2 is a worthy successor to the original Droid.

So what’s changed in the sequel? Not much, it seems. A tipster from Gizmodo confirmed that the successor will still sport a 5-megapixel camera, and from the looks of it, will also have Motorola’s new Motoblur UI running on top of Android 2.1 (more on that below). There’s also the refreshed slide-out QWERTY keyboard.

Essentially, the Motorola Droid 2 has the same camera, the same overall design aesthetic (with only a few refinements), and Android 2.1 OS. But, the person who actually got hands-on time with the device was told that the device would likely not have the Motoblur UI on it, and that it would be a stock Android device running  Froyo, which will be quickly updated if it’s launched with Android 2.1. Phew, I was starting to worry about that.

It’s not all bad, the internals of the upcoming device have surely been beefed up, but if the device does indeed come with Motoblur UI running on top, kiss your speedy updates goodbye. One of the best things about the Motorola Droid had going for it that it was a great device that was running stock Android. It was also the first in line to receive the Android 2.1 update, right after the Nexus One was announced. I’m sure the device will be a great piece of machine, but in certain ways, it feels like a bit of a step back in my mind. Let’s hope it’s got a few surprises in there for us.

Still, it can be assumed that the Droid 2 will benefit from an ad campaign as compelling as the first Motorola Droid. Very in your face, and inescapable. We’re hearing that the device will be released in the “next couple of weeks”, which would make current rumors of a possible launch somewhere in between July and August very likely. What would be more interesting, and maybe even smart, is if Verizon released the DX and D2 simultaneously, giving customers the choice between a beefed up Droid with a better keyboard, or the massive EVO challenger, the Droid X. I’d certainly be going for the latter.

When Verizon launched the Motorola Droid X teaser site yesterday, it caused some to raise a few eyebrows. Initially, the...