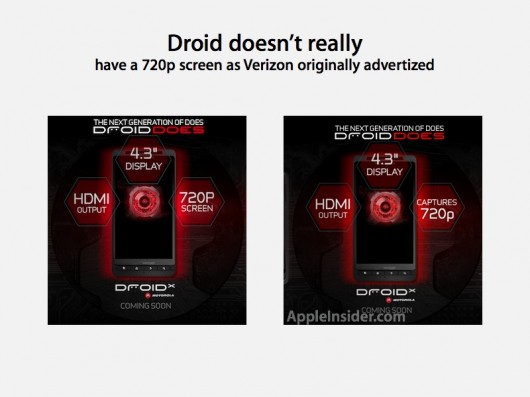 When Verizon launched the Motorola Droid X teaser site yesterday, it caused some to raise a few eyebrows. Initially, the site reported that the Droid X sports a 720P screen, but that is not exactly accurate. The Motorola Droid X is capable of taking 720P video with it’s it’s camera, sure, but it’s screen does not have an HD resolution of 720P. The display, it turns out, has the same resolution as the original Droid.

You’d imagine that Verizon would have thought that one through and not let this kind of slip-up actually go live. Verizon could have just worded the capabilities of the Droid X wrongly, but that’s still something someone should have caught, and suggested a different way of saying it. Shortly after the launch of the teaser site, the “720P screen” was changed to “Captures 720P.” That slight change in language effectively put the kibosh on any whispers that the device would have a 1280 x 720 resolution. What a big mistake.

To be fair, though, Verizon isn’t the first to slip up with product features. Apple recently advertised Flash on the iPad by mistake (oops). Luckily for Verizon, their mistake was just on a teaser site, but it’s still certainly irritating to get our hopes up like that, as unbelievable as it was to begin with.

In the end, these things do happen, and having HD resolution is an absolute novelty. Sure, HD display may be on the way in the future, but for now it’s not possible. I can’t say that because of the lack of this, the Motorola Droid X won’t sell well. It’s certainly going to be a great device, even if the screen resolution (854 x 480) is quite a ways away from being an HD screen.

On thing that worries us is that, with the massive 4.3-inch display on the device, the resolution will have less pixel density that that of the original Motorola Droid, which sports the same screen resolution.

So HTC and Motorola are making bigger screens with the same resolution, and Apple is keeping the same screen size, and beefing up their resolution for the iPhone 4. Will the new Motorola smartphone’s display looked washed out? Time will tell.

Motorola Droid 2 from Verizon Gets Hands-On Time and Impressions

Not to be outdone by the Droid X, Motorola's Droid 2 is also starting to make some public appearances.  A...