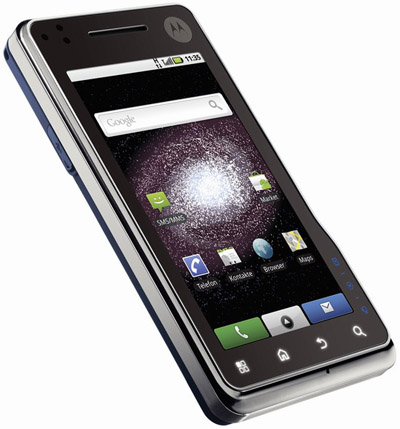 The Motorola Milestone XT720 has been officially announced for Germany. No carrier partners were mentioned nor how much will the all-touchscreen device cost once it starts selling, leaving us room to speculate. I’ve no doubts some of the country’s leading operators will definitely pick it up at some point, but in the meantime our German readers will have to grab the XT720 unlocked — if that’s actually what they want. We think the price for an unlocked, contract-free device will be around 500-600 EUR.

You probably already know the specs, but they are worth repeating nonetheless. Moto’s new Android smartphone rocks an 8-megapixel camera with Xenon flash and the ability to record HD videos, 3.7-inch WVGA touchscreen, HSPA and WiFi connectivity, Android 2.1, GPS, HDMI out, Bluetooth and a microSD expansion slot (you get an 8GB memory card inside the box).

In other words, we’re talking about one of the most capable Android devices released to date. If it had a keyboard I would grab it instantly. This way, I’m waiting for the DROID 2 (or that’s the Milestone 2?)…

Gameloft unveiled its line-up for E3 that includes games for iPhone, iPad, DSiWare and PlayStation Network. We don't care about...