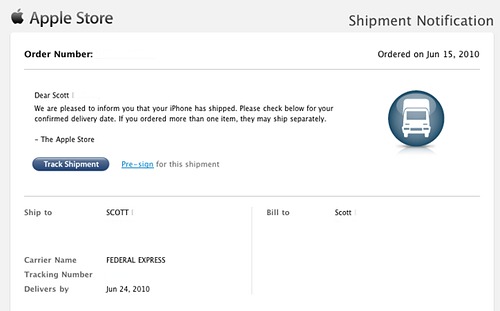 The iPhone 4 has just started shipping, hooray! But wait, some pre-orders were canceled by Apple and AT&T. Sad panda. Now there are thousands of people who have reason to celebrate, especially since they seem to be the lucky ones who were able to get through the horrid pre-order fiasco and secure Apple’s new handset. Those who were able to pre-order the iPhone to have it delivered to their homes will be treated with it on launch day. Hopefully. There will almost definitely be no early shipments; you know how Apple rolls with the iPhone.

On the huge down side, many customers had their orders canceled according to Gizmodo. Nothing could be more disheartening than jumping for joy after getting through the pre-order system only to find a notice from AT&T saying that your order has been canceled. Now, AT&T is claiming that the cancellations are only for extra pre-orders, but some customers are saying that they only made one order and it was canceled. Some customers were saying that they also received notices from Apple to let them know that their iPhone 4 orders were not going to ship, either.

What’s going on here? Could stock be that low? AT&T did have to stop pre-orders shortly after 600,000 were sold due to the inability to fill demand. So perhaps it had no other choice than to cancel some orders in order to make sure there were no delays or other issues with stock. I don’t know which I’d prefer: do I want to be told that stock ran low and I’d end up waiting a few extra days (or weeks), or would I rather be told that my order had been canceled? If I wanted the handset right away, I’d say the latter so I can line up bright and early for the smartphone on day one.

My condolences go out to those whose iPhone pre-orders were terminated by either Apple or AT&T, and many congratulations to the lucky customers who received notice that their handsets are on the way. It seems like there is both really good and really bad news today for Apple customers. What a sad dichotomy for this year’s iPhone 4 launch, eh?

The mobile roundup – The ‘Did you preorder an iPhone 4?’ edition

The biggest story of the week the iPhone 4 preorder fiasco, as many would-be iPhone owners found it difficult to...