Earlier today I blogged about the Digitimes rumour that Nokia would be releasing a tablet in Q4, with a 7 or 9 inch screen, using an ARM powered processor, and running on MeeGo. MeeGo of course being the love child of Intel’s Mobiln project and Nokia’s Maemo project. 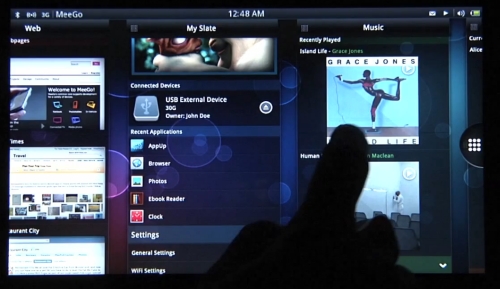 What would MeeGo look like if it ran on a such a large screen tablet device? Check out the video after the jump.

Now this UI is a hell of a lot more complicated than the iPad, but look at what you’ve got. Scrollable lists, an application launcher, and a visual task bar. It’s only a pre alpha, but I’m liking what I see thus far … but not enough to eject myself from my current belief that there is absolutely no need for an in between device. Laptops do what laptops do fine, phones do what phones do fine.

Update: After watching this video again, but this time with headphones, it’s made apparent that this is being demoed on something running an Intel processor. Whether or not the ARM powered version will be this smooth is a different question all together. We all know how stingy Nokia is with RAM in their mobile devices.