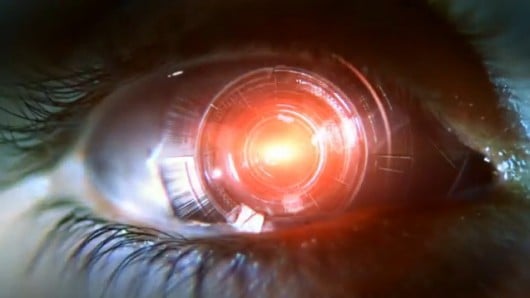 We knew Verizon would start their ad campaign for their Motorola Droid X sometime soon, and that time seems to be now. What we’ve got here is a 16 second clip, and just as previous commercials, you won’t be seeing the Droid X this time around.

The short teaser ad shows a human eye that changes into an eye of a robot – er, “Droid,” if you will. That’s about it, but the clip certainly gets your attention. It may not be silhouettes dancing behind bright background with the device in hand, but Verizon gets their point across in under 20 seconds. Simple, kind of creepy, and leaves you wanting more.

And, if you pay close enough attention to the flashes of light on the eye, you’ll see that some Motorola Droid X specs are confirmed. If you’re eye is quick enough, you can see that it says and HDMI out, 4.3-inch WVGA Screen, 8MP Camera, and “Droid Landing”, which is a new Twitter account. Looks like they put in a little more effort into this ad than meets the Droid-eye. Check it out for yourself by obsessively clicking the “play” and “pause” buttons on the video player to try and catch one of the specs-flashes

Expect this to be first of many ads pushing the Droid X, and later on, the Droid 2. The relentless ad campaign for the original Motorola Droid definitely help push it to its success as Verizon’s breakout Android smartphone. Hell, I still see ads for the device walking down the street in San Francisco. Verizon knows that their previous ad campaign worked wonders for them, so why should they stop now?

Most of the Droid line is aimed at males, as the ads are very dark and masculine. And, it doesn’t appear that it will stop now. Still, the massive phone is looks to be a a great piece of work by Motorola, and many people, male or female, should be very happy with the upcoming Android device.

Now it’s just the waiting part that kills. Good news is, it doesn’t look like we have much longer to get one of these bad boys in our hands.

Remember when we told you that Best Buy would most likely be getting an exclusive on a White version of...