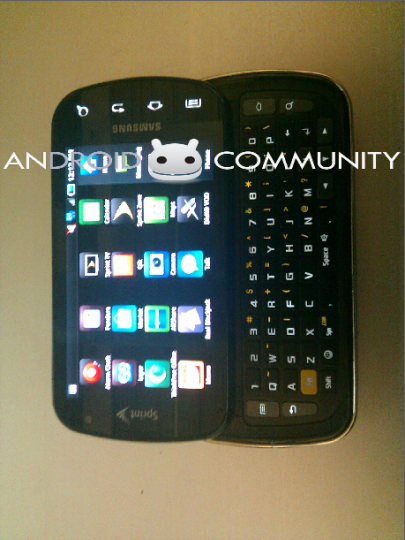 Remember the Samsung Galaxy S Pro, Sprint’s next WiMAX phone? We already knew that it would have a 5 megapixel camera with LED flash, Android 2.1, 1 GHz processor, 512 MB of RAM, but a tipster has given his impressions of the hardware and software, along with dropping a few more specs.

The processor build is ARM Cortex A8, Wi-Fi works on b/g/n, and there are 8.2 GB of ROM that can likely be switched to storage memory like on the Incredible. Although the Samsung Galaxy S Pro will predominantly run on EV-DO and WiMAX, it also has a SIM card slot for world roaming. TouchWiz 3.0 is still a  bit of a chore, but Android 2.1 runs smoothly and plays H.264 and Divx videos fine. The Super AMOLED display seems to clock in at a 480 x 800 resolution and the blacks “almost look wet”. There’s also a front-facing video camera, which will benefit from the WiMAX speeds when it comes to video calling and the hype around video calling from the iPhone 4. The keyboard felt plasticky, though the sliding mechanism was apparently smooth.

Right now, the HTC EVO 4G is Sprint’s WiMAX champion, with honourable mentions going out to the Overdrive mobile hotspot, but it will take more than two devices to make the massive investments in 4G worth while. Even once more hardware becomes available, LTE is just around the corner, which will quickly sweep these WiMAX phones under the rug. Until that happens, handsets like the Samsung Galaxy S Pro will have some time to shine.

No word on pricing or release date just yet, but stay tuned!