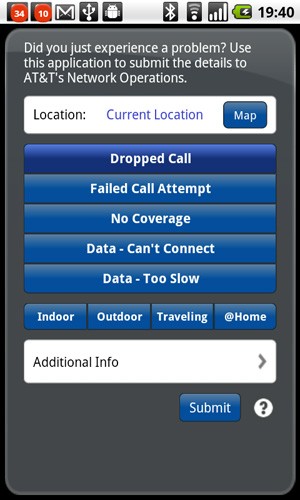 It’s not like iPhone users are the only folks on the AT&T network, so the carrier’s voice and data issues aren’t limited to just those smartphone users. Android is all up in that business now with the Backflip and HTC Aria on AT&T’s network, so it’s only fair that those customers get to bitch about the crappy coverage and dropped calls with Mark the Spot, too. AT&T has recently started taking the cries of iPhone users seriously and boosted its network in areas where it was reportedly bad with the Mark the Spot app. Android users, you can join in the cacophony, too.

The app works just like the one on the iPhone. When you run into an area where there is bad coverage, no data, failed or dropped calls, you report it to AT&T via the application. The carrier has been gathering this location-specific information and improving coverage and performance in those areas that need it most. With Android steadily growing, it makes sense that this app is available for the platform now.

I don’t want to give AT&T too much hell for its poor network performance. After all, I’ve seen improvements in areas where the carrier has claimed to make improvements. Just last winter in NYC, calls on my iPhone 3GS were dropping left and right and data coverage was non-existent even where signal was strong. Now, my iPhone gets great coverage and data speeds that are even faster than Verizon’s all over Manhattan. Perhaps AT&T is listening after all, and Android users should really take advantage of this new app.

It’s no surprise that overall network performance is improving after announcing that $19 billion is going to be poured into AT&T’s network and infrastructure. So when you’re infuriated and tapping away on this new app for Android to report your frustrations and anger, there just might be a good chance that the carrier is listening and doing everything it can to get on it. Or not. But at least it helps you blow off a little steam, right?

Google Voice now open to all [Update: U.S. only]

Google had previously loosened the reigns on Google Voice for students but now the search giant is making its calling...