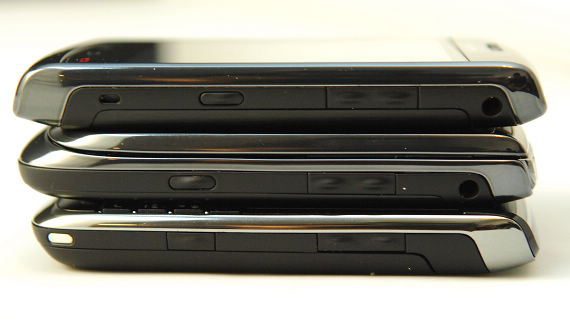 The source from the last batch of photos of the unreleased BlackBerry Bold/Torch 9800 slider has had some more time with the device, and developed a few impressions, along with this shot better showing the thickness difference with the Storm2 and Bold 9700.

The keyboard is apparently good and on par with with the Bold 9700 and Bold 9000, although the reduced thickness of the device when open and the length of the device does make things a little awkward. There’s also this weird little flap that RIM has put in above the microSD memory card slot to ensure it stays snug and connected, but that apparently makes installation a bit of a hassle. The 5 megapixel camera previously speculated is confirmed, and the battery cover shown is likely not what it will be shipped with – in all likelihood, it’ll have some kind of faux leather, especially if it retains the Bold name.

Alongside the 9670 Oxford clamshell, the BlackBerry 9800 will introduce OS 6 to the world in a form factor entirely new to RIM. It should have 512 MB of RAM, an HVGA display, Wi-Fi b/g/n, 3G via HSPA, GPS, and 4 GB of internal storage. The reviewer hinted that the BlackBerry 9800 will be available in September – too bad, we were looking forward to something this month on AT&T.