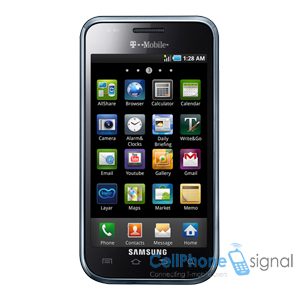 We know that Samsung will announce a cool Galaxy S phone for T-Mobile at the end of the month but now we’re hearing that the handset will be called the Vibrant.

According to Cell Phone Signal, the Vibrant will be powered by Android 2.1 and it should rock that big, gorgeous 4-inch Super AMOLED screen (check out the video after the jump for an example of this). This is a gorgeous display that could help the handset live up to its moniker.

The handset is also going to be powered by the custom 1 GHz Hummingbird processor. This chipset is supposed to be up to three times more powerful than competing smartphones.

Like the HTC HD2, the Vibrant is also supposed to come preloaded with a ton of multimedia content. The report says it will have The Sims 3 game preloaded, as well as Avatar, Amazon’s Kindle reading software and GoGo in-flight Internet support.

The Vibrant is expected to also have a 5-megapixel camera that can record HD video. There should also be Bluetooth 3.0, FM radio, WiFI, GPS, 16 GB of memory and a microSD slot to expand the memory.

The move should give T-Mobile a flagship handset to go against its rivals. The Vibrant should be able to go toe-to-toe with the iPhone 4, Droid X, and the EVO 4G. It’s a much better flagship device than the myTouch 3G Slide, I believe.

Whatever Samsung’s Android handset for T-Mobile will be called, it’s another sign that the second-largest handset maker in the world is serious about being a major player in the smartphone space.

The company is trying to get its Galaxy S lineup on as many carriers as possible, as it just announced the Captivate for AT&T and the Galaxy S Pro should be Sprint’s second 4G handset. No word on a high-end Samsung smartphone for Verizon yet, but I wouldn’t be too surprised to see one by the end of the year.

Hop on after the jump for a closer look at the Galaxy S.

We had some hands-on time with the Samsung Galaxy S at CTIA. Check out that beautiful screen!

You may not have to wait long for the upcoming Android-powered Droid X, as some careful parsing of the teaser...