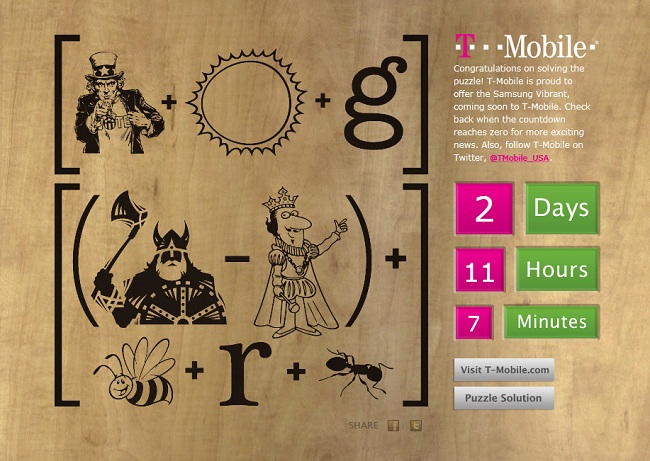 Well, it looks like we were right for predicting the Samsung Galaxy S would land on T-Mobile as the Vibrant, as the fourth-largest U.S. carrier has just thrown up a mysterious teaser page for the new Android handset.

The teaser page has a countdown clock (about two days left, folks) before we get some more information but I don’t think it’s too far out of line to say that the Vibrant will be similar to the Samsung Captivate that’s coming to AT&T soon. Both handsets are based on the Galaxy S line, which should mean that T-Mobile fans will soon have a killer handset to call their own.

The Vibrant should rock a 4-inch Super AMOLED display and these things are gorgeous, folks. We had a chance to play with this display at CTIA and the colors are vibrant (heh) and crisp and there’s a certain “wow” factor when you see it. This and Apple’s Retina Display will go toe-to-toe over the next few years for the title of best smartphone display.

The T-Mobile smartphone should also have Samsung’s 1 GHz Hummingbird processor. This workhorse is supposed to be more powerful than the Snapdragon one in terms of raw graphics horsepower, as test show it can pump out about three times the graphical output as the iPhone 3GS.

The Vibrant should be coming with Android 2.1 because Samsung will probably layer on its S Life UI on top. I wouldn’t be surprised to see T-Mobile to throw on some special software tweaks like it did with the myTouch 3G Slide. Hopefully, we’ll also see Android 2.2 hit the device soon.

I think a 5-megapixel camera will be included and you can be sure that WiFi, GPS, Bluetooth and other connectivity goodies will be included. We’ll have all the details in a few short days, so keep it tuned to IntoMobile.

In the meanwhile, let’s try and figure out what the image above means, as it could hold some more clues to the Vibrant.

A quick look in the Android Market sometimes makes me wonder whether Google just lets developers go willy nilly on...