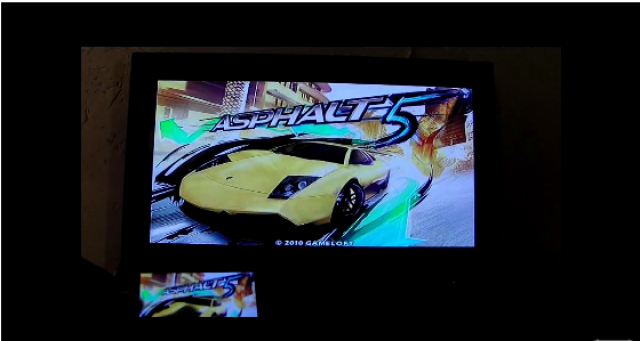 Say what? Most of us didn’t even know it was possible, but it looks like the Samsung Galaxy S has video-out capabilities right from the 3.5 mm headphone jack. Craaazy.

The most common way we’ve seen video-out possible comes from either a USB port, or a built-in HDMI port, but the headphone jack? Wow. The international version of the Samsung Galaxy S seems to have this built into the display, and all you need is a cable with AV ports on one side, and 3.5 mm jack on the other, and Voila!

The video claims that it supports HD video playback, but I seriously question the quality when compared to a HDMI port. It’s not known if any of the U.S. versions of the Galaxy S will support this feature, but with the DLNA support, you should be fine – If you have a TV that supports DLNA, that is. If you have a PS3 or Xbox 360, it may work that way too.

Now, the clincher: It may not be a huge deal to some, but other devices that sport HDMI ports are unable to do this. The Samsung Galaxy S video-out method allows you to see the entire phone’s user interface, instead of just your videos and photo gallery. You can check e-mail, browse the web, hit up the Android Market, and pretty much anything you’d be able to do with the device if it weren’t connected to a TV. The video shows a demo of Asphalt 5 as well, and it looks pretty damn good. I think I’m still in a little awe that this is even possible to do.

So, mega-geeks, what do you think of this? I’m thoroughly impressed, and it adds an appeal to the Samsung Galaxy S other than all it’s already known great features. If you got around $700 dollars lying around and don’t mind being on edge at all times, you may want to go ahead and pick one up from Amazon. Even if the U.S. variants don’t support this, I’d say you’re better off saving up for the Samsung Epic 4G.

Qualcomm has just announced that they're launching a mobile augmented reality platform and will release a software development kit for...