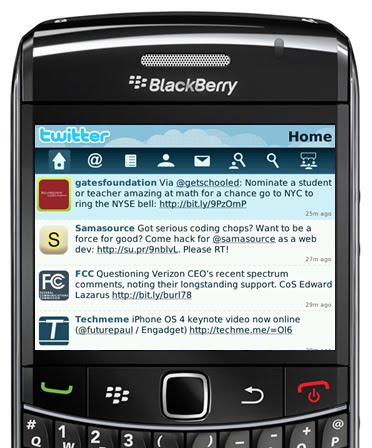 BlackBerry Twitter fanatics can start getting excited now as the official Twitter for BlackBerry application has finally grown out of beta. We’re proud to see that the app has graduated into full, official status and with it comes a whole slew of new features and improvements. It’s about time after so many beta updates. Letting your friends know about the mundane details of your life has never been easier or more fun! To start, there are a number of new languages that are now supported: Portuguese EU, Japanese, Indonesian, Russian, Turkish, Dutch and Korean.

Thanks to the feedback of beta users, Twitter listened up, took the beta tester community’s advice and brought some of the features those users were clamoring for. You’ll now be able to “access any user’s profile from anywhere in the application using auto-complete functionality for followers,” according to RIM Media Relations.

In case you missed out on the updates in May, and part of what’s also included in the official client, here they are:

Tweeting about your weekend loafing at home, the weird turkey sandwich you had at lunch or maybe those strange, random comments you have about sports games that no one will ever understand unless they’re watching the same game will be so much easier now.

Starting tonight, the full launch will start rolling out and continue throughout tomorrow morning. If you want to pick it up, all you have to do is head on over to BlackBerry App World under the social networking category and you should be all set to go!

The Verizon Motorola Droid X isn't even out yet, and we're already seeing Adobe's Flash 10.1 Player for Android running...