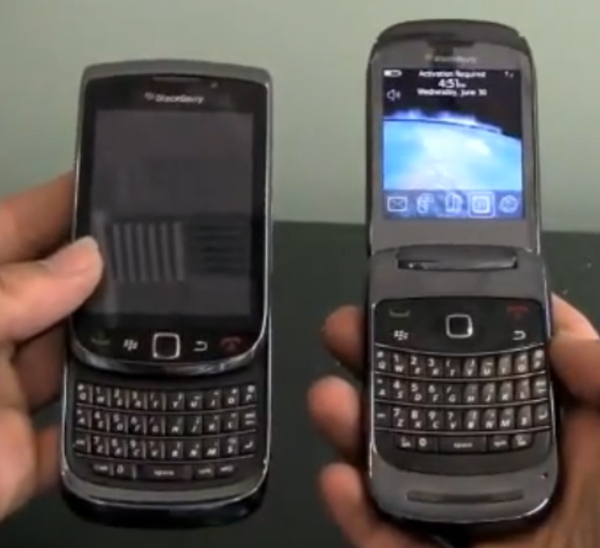 This morning we’ve got a trio of videos showing the breadth of RIM’s immediately upcoming BlackBerry lineup, featuring the 9800 slider code-named Talladega (launching as either the Bold or the Torch), the 9670 clamshell code-named Oxford, and the BlackBerry Curve 9300, also known as the Kepler.

First up, the BlackBerry 9670 that’s being reviewed is an older version, evidenced by the 3.2 megapixel camera on the back (unless, by some horrible twist of fate, RIM downgraded the camera from 5 megapixels). Most of the software review we can ignore, since we’ve already seen the 9670 running OS 6.0. It’s worth noting that even with OS 5.2, it looks like the 9670 is packing RIM’s new Webkit browser. Does that mean older devices will be able to get the new browser, regardless of whether they’re upgraded to OS 6? One can only hope.  As far as we can gather, the 9670 will have an HVGA internal display, and an external display not unlike the Pearl Flip.

The 9800 gets compared to Storm2, and is about same size and weight, though it there’s a slightly smaller screen on slider. Particular emphasis is placed on the sliding mechanism, which apparently is very hard to slide open accidentally. The slider form factor is a big change of pace for RIM, and if they want to sell to the diehard traditionalists, the slide will have to be especially well-done. Based on the other numerous pre-release sneak peeks, we’ve been able to gather that the BlackBerry 9800 has a standard capacitive touchscreen (no SurePress), 5 megapixel camera with flash, 512 MB of memory, and is coming to AT&T as late as September. Mac is sharp to point out that there’s only a convenience key on one side. What gives?

Finally, the purple, T-Mobile BlackBerry 9300 gets a go-over, revealing little of anything new. Still, it’s a nice paint job, and will hopefully be a worthy successor to the BlackBerry Curve 8520/30. We’re counting on the camera being upgraded to 3.2 megapixels, but everything else, from the casing to the display, seem more or less the same as its older brother.

Overall, this is a nice tour of upcoming BlackBerrys likely to launch by the fall, but there are still a few things to be launched further out that we don’t see here, like the 9700a Atlas, or the touchscreen/QWERTY Dakota. Personally, I’m still pretty stoked about the 9800, and will probably upgrade to it from the dusty ol’ 9000 I’m using now.

BlackBerry Twitter fanatics can start getting excited now as the official Twitter for BlackBerry application has finally grown out of...