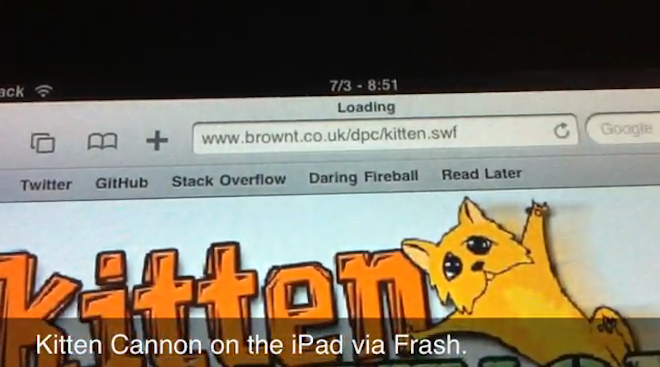 Remember how we told you you’d have to wait a bit longer to get the iPad port of Adobe Flash 10.1 Player, dubbed Frash, on your personal iPad? Well, it looks like we were wrong about that. Despite stability issues, the developer’s (@comex) warnings that it’s not ready for public consumption, and the inability to stream Flash videos, the Frash for iPad port has been leaked and is ready to be installed onto your jailbroken iPad!

Thanks to a tutorial posted by our friends over at Engadget, jailbroken iPads can now play all sorts of web-based Flash games and interact with crazy Flash menus all around the web. The only prerequisite to getting Frash working on your Apple tablet is that you have to jailbreak the device. This turns out to be one of those rare cases of “easier done than said,” so we suggest you read up on the Spirit jailbreak here and have at it. Or, throw caution to the wind and download the Spirit jailbreak utility directly from here (or here).

If you’re interested, you can find instructions on how to get Frash on your iPad. You’ll have to find the Frash.deb file on your own, as it contains bits of Flash Player code and therefore isn’t being hosted on any blog that we could find. But, you’ll want to make sure that you want to go down this route – Frash isn’t yet ready for public consumption and we’re advised not to install it until it’s been polished and able to fully support all Flash content. iClarified reports that @Chpwn put in his two cents on the matter:

The reason @comex didn’t post a guide is because it /isn’t ready/ and he /didn’t want to/ release it! Thanks /so/ much to whoever put Frash on Engadget, illegally including Adobe files and making @comex look bad. The Frash source is available for /developers/ to work on, not for someone to release unfinished. Read my tweets, and please uninstall now until a public release. Frash is not ready for public consumption.

Do as you will. We’ll be installing Frash on the iPad today, but you might just be better of waiting for Comex to make Frash fully ready to support all Flash content and release an official version.

Apple's iPad has been a tremendous success with mainstream consumer but the "magical" tablet is also gaining some corporate fans...