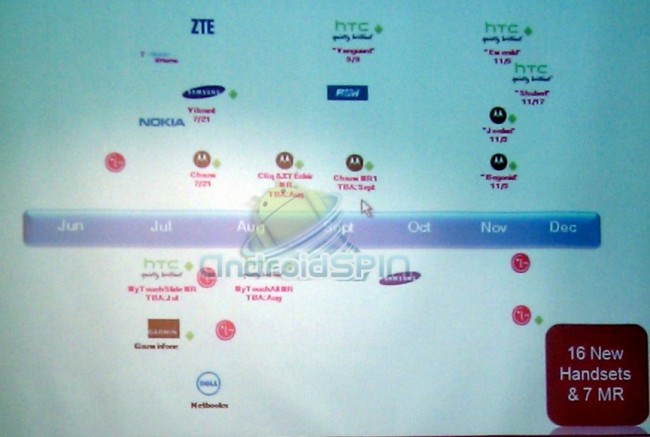 Above is a leaked roadmap for the devices T-Mobile plans to release for the rest of the year, and things are looking pretty exciting on the Android front. Please excuse the picture above, it’s very blurry, but tells a good story.

The picture may be a little out of focus, but for the most part, you can read most of the names. It looks like there are expected releases for new devices and device updates as well. From July to August, you’ll see T-Mobile rolling out the Samsung Vibrant (the already announced T-Mobile variant of the Galaxy S), as well as the Motorola Charm. Neither of these devices should come as surprise to you if you’ve visited IntoMobile recently, but what’s more interesting is that it looks like T-Mobile will be launching 5 more Android devices before year’s end.

There doesn’t seem to be a new device release until September 9th, at which point the HTC Vanguard is slated to be launched. Is this the first HSPA+ device that’s rumored to be released in September, and made by HTC? I’m gonna go with a big, fat, YES.

There’s also a new Blackberry handset that looks like it will be launched around September as well, but no estimated date is given.

After that, we’ll have to wait until November to see another device on the carrier, but Project Emerald may become a reality on the 5th of that month. Three devices look to be launched on the same November 5th date. One device by HTC, named Emerald, and two more Motorola devices, with names that are basically unreadable. We wouldn’t be surprised if we saw the Motorola Motoroi variant somewhere in that mix. LG looks to be releasing their first Android device for T-Mobile sometime later on in November as well.

I think it would be safe to say that most of these upcoming devices will be able to take advantage of T-Mobile’s blazing fast HSPA+ network, but only time will tell. Is T-Mobile finally stepping up their game on the superphone front? With the introduction of the Samsung Vibrant, that’s another yes as far as I’m concerned.

If you were on the fence of what carrier you wanted to stay with, does this make you want to wait and see what T-Mobile has in store for us?

Samsung Intercept Confirmed by Sprint for July 11, $99 on Contract

Falling in line with rumours of a July 11 launch, Sprint has confirmed that they'll be selling the Samsung Intercept...