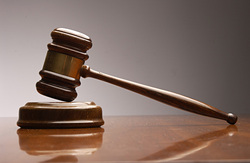 Remember back when the iPhone was annouced and how much everyone clamored for it? Well, almost everyone. Apparently folks were burned that Apple decided to chalk up an exclusivity deal with AT&T accused the two of conspiracy! A conspiracy to form a monopoly, that is. While it sounds silly, it certainly didn’t seem that way to Judge James Ware of the U.S. District court for the Northern District of California who granted class action status for a lawsuit against AT&T.

Originally filed in 2007, the class-action lawsuit alleged that Apple and AT&T had illegally exerted a monopoly by telling customers their iPhone contract was two years long when in actuality the companies’ exclusivity agreement was for an indefinite, undisclosed amount of time. That means even after iPhone customers’ two-year contracts have expired, they still don’t have the option of switching to another carrier because AT&T is still Apple’s only U.S. partner.

I certainly do love the conspiracy theorists and those who supported this lawsuit to protect the people who were just forced to buy the iPhone and use it on AT&T’s network, and the forced to use those iPhones once their contracts are over. But what are the other options? The iPhone will only work with AT&T! What a brilliant scam!

Now, I’m not saying people don’t keep and use their phones beyond their two-year agreements–I wouldn’t know since I’ve had about 15 phones since the original iPhone launch–but to assume that this was some sort of scheme between Apple and AT&T is ridiculous. No one is complaining that you can’t take an HTC Droid Eris and use it on T-Mobile or AT&T once your Verizon contract expires.

It will be interesting to see how this one plays out, but given the length of time it has taken for the development of this suit and the fact that it is still advancing might lead one to believe that AT&T may end up settling this somehow. I certainly hope not.

I don't know about you, but when I think about American Eagle Outfitters, I immediately think about high-end smartphones. Well,...