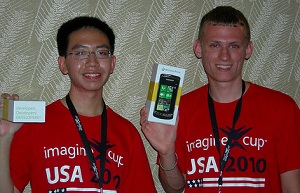 If you were hoping to be the first non-Microsoft person to get a Windows Phone 7 handsets, you’re out of luck because the software giant has already given two teens smartphones with its upcoming mobile operating system.

These kids deserved it though, as Christian Hood and Eric Lo, 17 and 16, won a developer challenge to get the coveted Windows Phone 7 handsets. The teens created a game called “Droid Assault” for the Windows phone and you can check out a brief demo of it here.

We know that Microsoft wants Windows Phone 7 to be a gaming beast and this game shows off how easy it could be to create games for the platform. The teens created the game for a PC and then (ingeniously) used a Wii remote paired over Bluetooth to act as the phone’s accelerometer.

“Once you’ve finished the PC version, it’s very easy to port to a phone,” Lo said.

We know that Windows Phone 7 will use Silverlight and XNA 4.0 for development and this should lead to 3D games and Xbox Live integration. We’ve also seen some cool demonstrations in the past that show you’ll theoretically be able to start a game on a phone and resume it on your PC or Xbox. Cool beans.

As for the device itself, it looks like the Samsung Windows Phone 7 smartphone we scooped a few months ago. While there’s no word on the specs, it’s safe to assume it rocks a capacitive touch screen, 1 GHz processor and all the connectivity goodies you’d expect from a device of this class.

We could see Microsoft Windows Phone 7 debut as early as October and there should be devices available from LG Electronics, Samsung, HTC and maybe even Dell at launch.

Are you guys excited about Windows Phone 7 or is this too little, too late?

Apple is making moves that could cause its iPhone to be more compelling to the Chinese market, as it has...