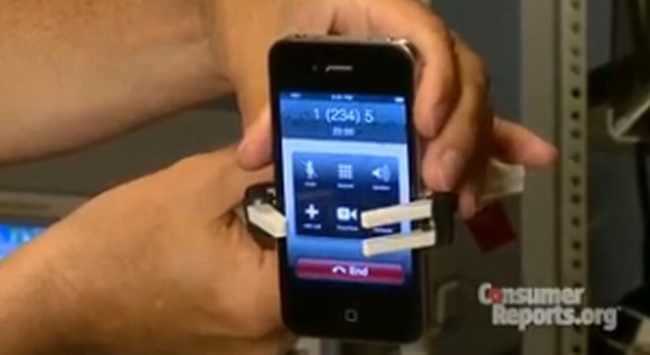 Consumer Reports, an independent agency that makes sure the stuff you buy isn’t a lemon, took it upon themselves to purchase 3 iPhone 4 handsets, each from different Apple stores, and then test them to see if this “Death Grip” wireless signal reception issue really is a problem. Guess what? The old “we calculated the size of the bars incorrectly” excuse isn’t really holding up. Consumer Reports is suggesting you use “a piece of duct tape” on the bottom left hand corner of your new, beautiful, glass and steel iPhone 4 to fix your reception issues.

Or you could just buy a bumper. Yes, it’s $30, but you paid $600 (either up from or over the course of your contract) to be privileged enough to be the first person in your social circle to have the latest and greatest Jesus Phone. Granted, a $600 phone should work without problems … but if you don’t want to give up iOS, or the retina display, or FaceTime, or the snappier processor, or whatever your new favorite feature of the new iPhone 4 is, just buy yourself a bumper and shut your organic eating yuppie face.

You’ve got to wonder, how could this “bug” not have been detected during product testing? It’s embarrassing when the CEO of one of America’s largest companies has to tell customers that they’re essentially holding their mobile phone wrong. It’s already entered the peripheral knowledge of popular culture. The “leaked” image of the iPhone 5 has also made enough rounds on the internet that chances are the only people who haven’t chuckled at it are your elderly grandmother and the poor Chinese people who actually build the damn thing.

Come on Apple, either make bumpers $5 or issue some sort of apology. You’ve already admitted that you can’t do math when trying to crunch the numbers for solving the age old question of how many signal bars to show, can’t you just admit that you can’t make an antenna? iPhone 4 owners out there want some answers!