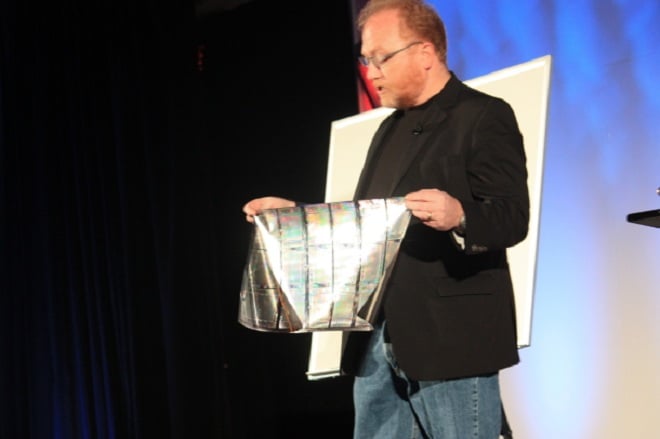 We know that Hewlett-Packard will use its recently acquired webOS platform for phones, tablets and even printers but HP could be throwing that OS on some crazy devices. How crazy? Well, are flexible displays crazy enough for you?

During the MobileBeat 2010 conference Monday, HP’s Phil McKinney showed off some of the flexible display technology that has been developed in the company’s labs. These things were undoubtedly cool because it’s bendable, doesn’t use much juice and can easily display video, photos, text and images.

Just imagine what you could do with an HP flexible display. You could use your webOS device at the breakfast table and fold it out to read the paper. When you’re ready to go, you can just fold it up to fit in your pocket and act as a normal smartphone.

The cool thing is that these HP flexible display devices should have good battery life. These displays are sort of like E-Ink in that in can show an image without drawing power, so expect battery life that rivals things like the Amazon Kindle or Barnes & Noble Nook.

Flexible displays have been the holy grail in the tech world because the value is clear. We’re slowly getting there, too, as Sony has also showed off flexible OLED screens that could find its way into smartphones.

So, what do you think readers? Would you be down for the first generation of webOS devices with HP flexible display technology or would you wait for the kinks to be worked out.

Those of you who have been enjoying the Korean version of the Samsung Galaxy S will be happy to hear...