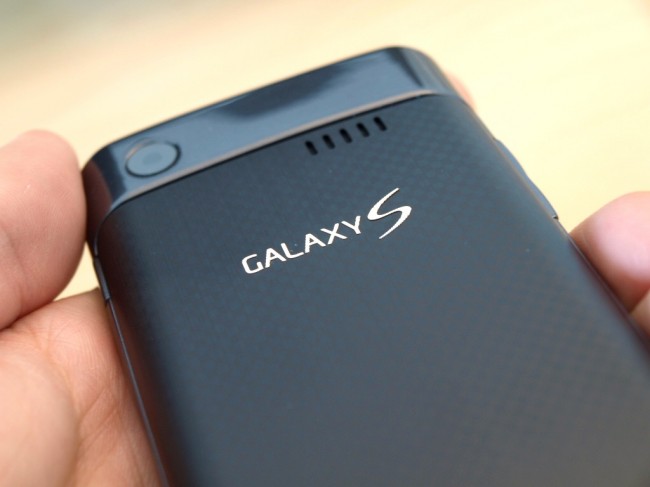 Apple might have the Retina Display in its iPhone 4, but Samsung is going full-throttle with their Super AMOLED technology in the Samsung Galaxy S. The talk of the town (good and bad) might be all about iPhone right now, but the Galaxy S is right around the corner and ready to take on the likes of the iPhone and other Android superphones. Naturally, we just had to get our hands on a Galaxy S of our own in the form of the AT&T Samsung Captivate – a Galaxy S variant – and show you what the hardware looks like.

The Captivate takes the already slim and minimal design aesthetic of the stock Samsung Galaxy S and adds some AT&T branding. The entire front face of the smartphone looks like one slab of glass, which protects the huge 4-inch Super AMOLED display and the four touch-sensitive (capacitive) buttons along the bottom edge. It just looks slick. With the screen turned off, AT&T’s Galaxy S variant looks like it could avoid radar detection on its way to bomb other Android smartphones into the design equivalent of the stone age.

The Captivate is even more minimal in design than the stock Galaxy S, which makes the upcoming AT&T Android phone look like it took cues from Apple’s design playbook – slick design is the word of the day here. There are few extraneous markings on the device – not even the volume control rocker has any markings on it. The only physical buttons are the volume controls and the power button. The battery cover is made of metal, and is secured by a unique slide-lock that’s built right into the frame of the phone. It seems like Samsung is looking to break away from the Android superphone pack with innovative little features like the battery door locking mechanism. Even the microUSB port has “innovation” written all over it – the port is covered by a little sliding door, as opposed to being completely exposed or covered by a little plastic cap/plug. The details are where this phone shines.

The minimal design lends to a really solid in-hand feel. The Captivate is a little light for our tastes, but it’s solid, nonetheless. Tapping on the display or the battery cover doesn’t elicit the same “hollowness” and “springy” feel that we’ve seen in other Samsung smartphones of past. We’d have loved to have seen the Captivate made entirely of metal, but a metallic battery door will suffice.