Apple has turned the smartphone world on its head when it first introduced the iPhone. Since then, other major players have been making tremendous advances and seeing a resurgence in prominence. Others are dangerousy falling behind. According to a survey conducted by ChangeWave Research, now is the time that most folks are planning to buy a smartphone within the next 90 days. Over the last year and a half, prospective smartphone customers rose and fell, and now they’re at an all time high.

Still at the top, and still the one to beat is Apple. Despite the glaring antenna issue with the iPhone 4, many still believe that the Apple smartphone is the best on the market. Its retina display is sharper than any others. The aluminosilicate, optical quality glass is something you’d never find on other smartphone displays. However, the Apple now has others to worry about.

Android is catching up very quickly, and in many ways is just as good or better than Apple’s iOS 4 depending on whom you ask. Thanks to Android, HTC is seeing a tremendous amount of demand, too. The HTC Droid Incredible is one of the more popular Android handsets wanted by the respondents of the survey, and Verizon’s inability to keep it in stock is a testament to that. However, looking at the huge jump in demand for HTC in June of this year, I’d say that has a lot more to do with the HTC EVO 4G than the Droid Incredible. The EVO very quickly sold out and supply couldn’t meet demand for several weeks. For many, it was a serious alternative to the iPhone 4. 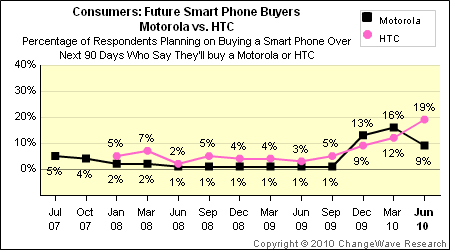 The survey shows that RIM and Motorola are falling behind the curve, but I can only partially agree with that assessment. RIM’s hardware and operating system, though constantly being refreshed and updated, are beginning to feel antiquated when compared to the likes of iPhone and Android. A device like the BlackBerry 9300, which is perfectly identical to the BlackBerry 8520 except for the addition of 3G and some color changes, make me scratch my head and wonder what RIM is up to. As far as its operating system goes, the small, incremental refreshes and updates it sees are making its users beg and plead for a complete start from scratch. Most die-hard BlackBerry users were very disappointed when they saw the unveiling of OS 6.

ChangeWave Research says of RIM, “In short, in recent quarters RIM models appear to have lost their ‘cool factor,’ and the onus is now squarely on RIM to regain consumers’ confidence in their products.” 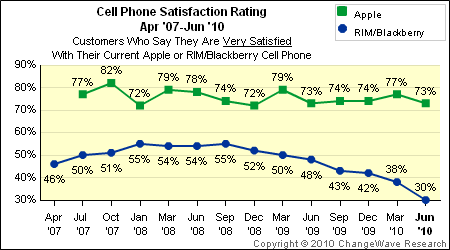 Motorola, on the other hand, isn’t slipping as much as the survey shows. Unfortunately, the landscape of the smartphone market changes so rapidly that by the time findings on a survey are published, the market and consumer mindset changes again. Motorola has Android to thank for its comeback, starting with the Cliq and very quickly followed up by the Droid. Just a month or two ago, Sanjay Jha, Co-CEO of Motorola, said that if he could just keep making the Droid to keep up with demand, he would. That was several months after the device’s release.

According to the survey, however, Motorola won’t have a hot second half for 2010. When the survey was completed in late June, most consumers were unaware of the existence and coming of the Droid X and the Droid 2, and teaser ads had only come out recently. I believe that those could have been huge factors in the outcome of this survey. In addition to those two handsets, Motorola has made it pretty clear that it will continue to crank out handsets for the rest of the year.

ChangeWave says that consumer demands are shaking up the smartphone market, but I believe that smartphone hardware and software evolution is shaking up consumer demands. Leading the way are Apple and HTC, while Motorola climbs and RIM declines until it gives the public a reason to get excited again. Meanwhile, manufacturers like Samsung, who has recently unleashed the Galaxy S line of devices, and LG, whose last smartphone worthy of a giant event was the Ally, are almost completely under the radar when it comes to the general consumer.

We've seen Android devices getting rooted before they are officially available, and the US variants of the Samsung Galaxy S...