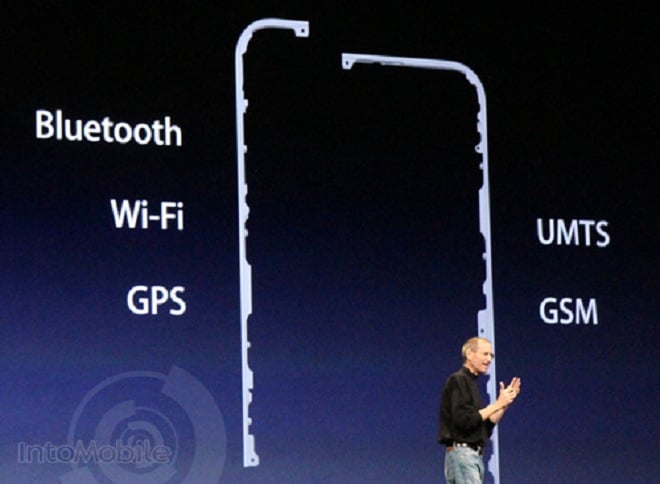 Apple addressed the iPhone 4 antennagate/Death Grip issues in a press conference Friday and CEO Steve Jobs admitted there was a problem but insinuated it was being overblown by the press. Still, the company will be giving out free bumper cases to all impacted users.

The company reiterated that the reception issues weren’t exclusive to the iPhone 4 and its stainless steel band which doubles as the antenna. Apple showed a video of phones like the BlackBerry Bold 9700, Droid Eris and Samsung Omnia II experiencing signal loss when held in certain ways.

Apple said it knew that if the iPhone 4 were gripped in a certain way the bars would go down just like every smartphone. The company said that despite the uproar in the media, its AppleCare data suggests only .55% of users have complained about this directly to Apple by calling in. Additionally, the company said the return rate for the Apple iPhone 4 is 1.7%. For comparison’s sake, the iPhone 3Gs had a return rate of 6%.

Jobs also said the iPhone 4 drops less than one call per 100 compared to the 3GS.

The company will be giving out free cases to users through September 30 and those who have already purchased one will get a refund. Users will be able to apply for this through Apple’s website shortly and it will offer a variety of cases. It’s a good move by Apple to appease users but those cases really do kill the aesthetics of the iPhone 4.

The press conference was necessary because the Apple iPhone 4 antenna problems slowly became a major issue. The first few reports were generally scattered and could be associated with launch-day issues. But once Consumer Reports took back its recommendation, Apple knew it could have a problem with the mainstream.

Jobs also said the elusive white iPhone 4 will be available at the end of July in limited quantities and that an upcoming software update will boost the proximity sensor.

In our poll, the majority of IntoMobile readers wanted a full recall and retooling. That’s not going to happen, but what did you think of Apple’s response?

It hasn't even been a month since the iPhone 4 went on sale, and Apple has managed to sell 3...