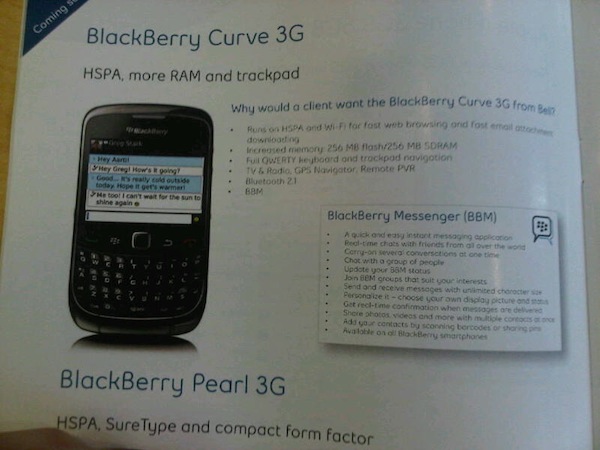 The upcoming BlackBerry Kepler spotted on the way to T-Mobile as the 9300 and rumoured to be going to Verizon as the 9330 is apparently coming to Bell in Canada, too. This unreleased Bell leaflet shows the 9300 branded as the Curve 3G, and confirms that it indeed has just as much memory as the Curve 8530 Bell launched in December, and has Wi-Fi and GPS as we’d expect.

I’m still boggled by the necessity for this phone. As an upgrade from the 8520, fine, it barely makes sense just to get 3G in there, but the screen and the camera haven’t changed at all, and the 8530 has already been offering 3G speed on CDMA carriers. What does the Kepler have to offer that we don’t know about?

There aren’t any specifics about a release date, but hey, maybe before the end of the summer in time for back to school. No doubt we’ll start seeing hints of this device for other Canadian carriers pretty soon too.

RIM has just released a new tool for developers (announced back at BBDC) that allows them to incorporate location data...