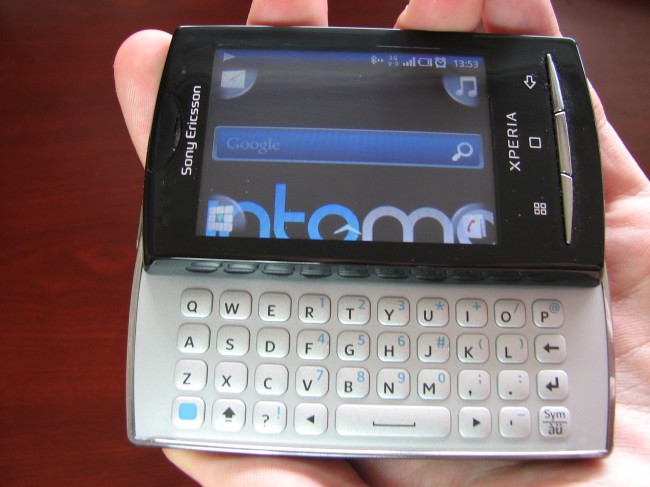 I’ve had the weekend to play with the Sony Ericsson Xperia X10 Mini Pro, and am so far pretty happy with it. There’s a lot that I’ll save for the full-blown review later this week, but here’s a quick warm-up.

The X10 Mini Pro’s software is miles better than the original, larger Xperia X10. It is smooth and responsive, making me actually want to use Timescape. Mediascape wasn’t included, but I don’t find myself really missing it that much. Mediascape is a really great custom app Sony Ericsson cooked up to casually browse through tweets and Facebook updates. While Timescape itself handles very little interaction, usually booting you to mobile sites to reply or click links, it does allow you to associate third party social networking apps to pick up the slack.

The UI has taken a few adjustments to accomodate for the smaller screen, mostly for the better. All apps are shown in a three by three grid in a secondary set of home screens, while widgets occupy entire home screens above. Sometimes this doesn’t work so well, as widgets like Google quick search take up so little room, even on the tiny screen. For larger widgets, like Foursquare’s, the layout works wonderfully. Finally, you’ve got the four corners, which host some of your favourite apps across all of the widget home screens. By default, they’re the address book, phone, music, and message, but you can swap them out for any apps that are on the phone.

Although you’d think that being so tiny would mean the keyboard was cramped, or the screen too small, the only compromise that has been made for the sake of the Mini Pro’s size is battery life; I’m lucky to get through a whole day of moderate/heavy use. The poor little guy only has a 930 mAh battery, while the bigger phones out there, like the Droid X, pack a 1540 mAh battery. Sure, those ones have a consummately large screen, but the X10 Mini Pro has all of the same wireless capabilities, like Wi-Fi, GPS, and 3G to contend with.

Those are just some of my initial thoughts – a more involved review will be headed to you hopefully by the end of the week. Anything in particular you guys would like me to check out?